The UNP reforms: a dangerous but unavoidable experiment 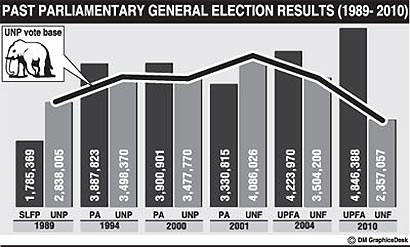 Whatever the long term objectives of the reform proposals that have been adopted by the UNP Working Committee may be, the immediate target of them seems to be removing the party leader Ranil Wickremesinghe from that powerful post. Although it is said that the UNP Working Committee has passed these reform proposals in order to elect all main posts in the party hierarchy, the purpose of it is nothing other than replacing incumbent leader with somebody else.

It is a well known fact that persons were elected through ballot at the UNP’s annual conventions for all party posts except for the party leader’s post. The present proposals envisage all posts in the party hierarchy be elected through ballot. The essence and the only difference in the present reforms is holding of election for the post leader as well. Therefore, these reforms are aimed at a person.

There is a consensus among the majority of members that the party must be reorganized. However, in spite of the current reforms being passed by the Working Committee some people in the party have expressed their reservations on the purpose of them.

The rationale behind this reform package is that the party has been faced with repeated election defeats for the past several years and it needs a way out. On the other hand, the party Working Committee has now deviously decided through these reforms to replace the incumbent leader with somebody else. The implication is very clear.

There had been aspersions cast against UNP Leader Ranil Wickremesinghe mainly by the ruling Sri Lanka Freedom Party (SLFP) that the party will not win elections under his leadership. With continuous election defeats the notion has taken root so deep even among the UNP itself that some of the UNP candidates during the last General Election spoke of putting an end to the defeats and defection, rather than speaking of winning the election, which was expressively defensive.

All positions elected in a particular year except for that of the leader would cease to exist with the next annual convention under the UNP constitution. No election would be held for the post of leader unless or until the incumbent Leader resigns or die. If someone or some group in the party hopes to replace the incumbent leader with somebody else he or they have to bring a special motion to that effect at the annual convention or at a special convention.

Changing the leader would not be an open contest, rather it, in the first place, would be a revolt against the incumbent leader and it would be only after that an election for the post would be held, in the event the revolt is successful. The first part of the process would always be difficult, since one has to garner sufficient support from the membership before the leader gets wind of it. The initial step of finding like minded people most probably would take shape of a conspiracy and once the leader sniffs out the move he would scuttle the effort by way of simple intimidations such as demotion within the party. Even without venturing into such tactics Ranil Wickremesinghe could cause the efforts against him to fail twice before.

However, the repeated defeats in ten local government elections in the East, eight provincial council elections, a Presidential Election and a parliamentary election within a short span of two years have so crumbled the morale of the rank and file that almost the entire party has tended towards party reforms with seeming majority calling the leader to call it quits. But the question still remains whether the only culprit behind the UNP defeats is the Leader.

The ruling United Peoples Freedom Alliance (UPFA) won all the above elections one after one obtaining more and more people’s support in light of three major factors. The main among them was the repeated war victories the security forces gained culminating in the total decimation of the LTTE leadership. The other two were the Executive Presidency that was introduced in 1978 by the very UNP that is lamenting on the election defeats and the meticulous order in planning the above elections by the UPFA leadership.

The UNP could have successfully claimed a share of the war victories owing to the increasing international involvement in the Sri Lankan ethnic affairs that exposed the LTTE’s intransigency and Karuna’s involvement in anti LTTE activities following the peace process initiated by the UNF government in 2002. But some hypocritical utterances against the advancing troops by the UNP leaders while the LTTE fortifications were falling like dominos prevented them from doing so.

On the other hand the UNP’s election defeats cannot be attributed purely to those utterances in the light of the defeat of the JVP which not only steadfastly supported the war efforts of the Mahinda Rajapaksa Government but also largely contributed to create a psyche in support of the war in the country. What really happened was that people wanted to be with the winners and to share the credit for the war victories. They were so obsessed with this quest that they even gave up the man who spearheaded the victorious segment of the war, General Sarath Fonseka.

Sajith Premadasa, a seeming contender for the leadership attempts to attribute those remarks to the defeats, but it is the general knowledge that almost all in the UNP were unhappy when the troops were advancing in the Wanni and no one in the UNP found fault with those comments when they were made. Had the Wanni thrust by the security forces failed, it is the rhetoric by the leaders of the Government and not the contemptuous remarks by the UNP leaders that would have been ridiculed today.

This does not mean Wickremesinghe is not responsible for the UNP defeats. Obviously, he must take the moral responsibility for the UNP defeats, first of all. Also he has not been so aggressive as to tackle the highly disadvantageous situation. It is a different matter whether there are such aggressive characters in the UNP, for which time would answer.

The main obstacle the UNP is faced with today is the system that was introduced by the UNP itself, with the intention of wielding power for- ever. If President Premadasa’s did not carry out his “one man show” that brought about a crack from the top of the party and his regime did not create an insecure feeling in the country with the crackdown on the JVP, the UNP would have been in power up-to-date.

The UNP cannot wait until circumstances create a situation that would lead it to power, as had been in favour of Chandrika Kumaratunga in 1993/4. It has to go through even dangerous experiments such as the current reforms. If the circumstances permit the party to recapture power with another leader the credit would go to the reforms, otherwise the UNP would miss Wickremesinghe.

An imminent danger with respect to the reforms is a situation where the party leader might be changed every year in the light of absence of a strong character.

Home » The UNP reforms: a dangerous but unavoidable experiment