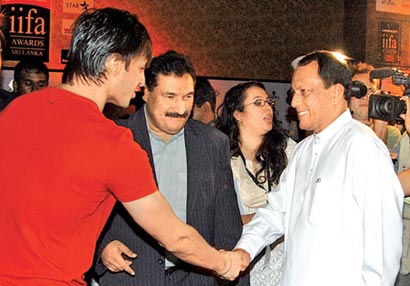 The Indian Film Academy opened its second decade of festivity in Colombo yesterday.

The three-day Videocon IIFA Weekend is expected to spark massive media coverage for Sri Lanka as foreign artistes as well as business giants across the globe will take part, showcasing the country as a business enterprise, tourist destination as well as an excellent film location.

Day one of the IIFA weekend began with the IIFA global Press Conference. Over 400 local and international media from different institutions took part in the event which unveiled details of the entertainment in store for the days ahead.

Economic Development Deputy Minister Lakshman Yapa Abeywardana said that Sri Lanka did not get the opportunity to stage grand scale festivals for nearly three decades. He added that the Government has put every effort to make IIFA awards a success and see that everything runs smoothly.

Sri Lankan cricket captain Kumar Sangakkara said that it has been a challenge to stage IIFA in Sri Lanka.

First up on the entertainment schedule in IIFA’s list was the ‘IIFA Rocks’ fashion extravaganza which showcased some stunning garments from Indian designers Manish Malhotra and Vickram Phadnis as well as Sri Lankan designers Yoland and Kanchana (KT Brown).

The FICCI-IIFA Global Business Forum to be inaugurated by President Mahinda Rajapaksa will follow today. President Rajapaksa will exchange views with reputed delegates from the business and entertainment sector as well as some personalities involved in cricket. The event will take place at Colombo Hilton.

IIFA workshops on cinema for students and filmmakers also commences today at the Ceylon Continental. Director R. Balki and actors Anupam Kher and Jacqueline Fernandez will share their experiences with the students in session one while the second part of the workshop is aimed at creating a network between Indian filmmakers and Sri Lankan artistes and directors.

Mandira Bedi, Chunky Pandey and Javed Jaffrey will host UNICEF’s ‘Cricket for Children’, charity cricket match in the afternoon. Bollywood stars and Sri Lankan cricketers will play for the project which funds the IIFA village in the north. The proceedings will also go towards rehabilitating former child soldiers.

IIFA Bling, the second fashion show featuring designs by Rocky S and Nandita Mahtani will be in store towards the night. Soon to be launched theatre production ‘Kingdom of Dreams’ will preview along with a performance from Hassain Kuwajerwalla, Isha Shravani and Gauhar Khan.