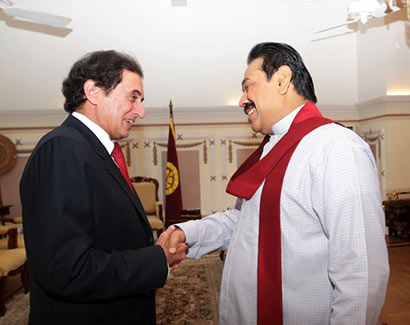 Dr. Anoop Singh, International Monetary Fund’s Director for Asia and the Pacific region, who arrived in the island to participate in “Sri Lanka Economic Summit”, gave this assurance when he met President Rajapaksa at Temple Trees yesterday (July 10) evening. “You have brought Sri Lanka to a higher level of development within a short period”, said Dr. Singh. He went on to add; now it’s time to focus on long term economic stability.

Sri Lanka’s economy has stabilized to a satisfactory level during the past three-four years, responded the President. “Our problem is high cost on fuel and negative consequences of climate change”, added President Rajapaksa.

Recalling his visit few years ago to Sri Lanka, the IMF’s Regional Director stated, there is vast improvement visible now. Government gave priority to the development of infrastructure facilities such as road, electricity and telecommunication, and people are reaping the benefits now President said.

As Asia is the center of global economic growth in the 21st century, President Rajapaksa’s decision to further enhance relationship with East Asian countries including China is a correct step, Dr. Anoop Singh added.

Dr. Koshy Mathai representing the IMF, and Secretary to the Treasury Dr. P. B. Jayasundara participated in this discussion.