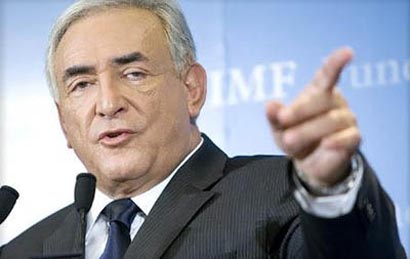 New York (CNN) — The head of the powerful International Monetary Fund will spend the next few days in an 11-by-13-foot cell at New York’s Rikers Island jail complex — a far cry from the $3,000-a-night luxury suite where he allegedly chased a housekeeping employee naked down a hallway and attempted to sexually assault her.

A haggard-looking Dominique Strauss-Kahn was denied bail in a New York courtroom on Monday. By the end of the day, the 62-year-old was “settled” in at the East River compound, said a New York Department of Corrections spokesman who declined to be named.

Strauss-Kahn’s next court appearance is scheduled for Friday. Until then, he will have no contact with other inmates because he is considered a high-profile detainee, the spokesman said.

His new neighbors will include 14,000 men and women who have been accused or convicted of a host of crimes committed in New York City.

Just a few days earlier, Strauss-Kahn was staying in a posh suite at the Sofitel hotel replete with its own foyer, conference room, hallway and living room. Police said the IMF chief was naked when he allegedly tried to lock the 32-year-old hotel employee in the suite and force himself on her Saturday.

The next day, Strauss-Kahn was supposed to be in Europe talking with German Chancellor Angela Merkel and preparing to be a leading figure in sessions addressing economic crises in Greece, Portugal, Ireland and beyond. Instead, he found himself in “The Tombs,” a Lower Manhattan jail that proved to be a way station before his departure to Rikers Island.

His arrest rattled the financial world, given his leadership directing multi-billion-dollar loans and financial policy that regularly affect tens of millions of people.

But its impact was most felt in France, where Strauss-Kahn had been not only a leading contender to be the Socialist party’s presidential nominee but a favorite to unseat incumbent President Nikolas Sarkozy.

Prosecutors argued Monday, during the IMF chief’s arraignment, that they believed Strauss-Kahn would right now be in France, living “open and notoriously,” if two plainclothes Port Authority police officers had not detained him in the first-class cabin of an Air France plane Saturday minutes before take-off.

His defense lawyers said Strauss-Kahn was simply hurrying off to a lunch appointment — pointing to his lack of a criminal record and willingness to remain with his daughter in New York in requesting $1 million bail.

Criminal Court Judge Melissa Jackson sided with the prosecution in characterizing Strauss-Kahn as a flight risk and denying him the ability to walk free on bond.

“The fact that he was about to board a flight, that raises some concerns,” she said.

“This battle has just begun,” the lawyer told reporters. “We think this case is very defensible.”

“The top charge, criminal sexual act in the first degree, is a class B violent felony, carrying with it a maximum sentence of 25 years in prison,” the New York district attorney’s office said.

Strauss-Kahn’s accuser picked the IMF chief out of a lineup Sunday at a New York police station, saying he was the man who had sexually assaulted her, according to a law enforcement source with direct knowledge of the investigation.

Some at Strauss-Kahn’s Socialist party headquarters burst into tears Monday in reaction to the news.

The case also rattled the IMF, which assists countries suffering economic difficulties by providing loans. Founded after World War II, the IMF is composed of 187 countries.

The organization’s executive board met “in an informal session to receive a verbal report from senior fund officials,” IMF spokeswoman Caroline Atkinson said in a press release. Having been briefed on developments regarding Strauss-Kahn, she added, “The IMF and its executive board will continue to monitor developments.”

About midday Saturday, Strauss-Kahn was in his 28th-floor suite when the housekeeping employee came in to clean it, according to New York Police Deputy Commissioner Paul Browne. He shut the door, preventing the woman from leaving, according to a criminal complaint released by prosecutors.

Strauss-Kahn emerged from a room naked, according to Browne, and ran after the woman down the hallway of the suite.

“He grabbed the victim’s chest without consent, attempted to remove her pantyhose” and forcibly grabbed her between her legs, the complaint said. He also forced her to perform oral sex on him, Assistant District Attorney John McConnell said at Monday’s arraignment.

The 32-year-old woman said Strauss-Kahn pulled her into a bedroom and started attacking her, police said. She fought him off, she told investigators, but he then dragged her into the bathroom and forced himself on her.

By the time officers arrived, Strauss-Kahn had left, leaving his cell phone behind at the hotel, according to Browne.

He departed in a hotel limo, according to the law enforcement source. He called the hotel to say he had left his phone behind and asked if it could be brought to him.

That call came in about the same time police arrived to investigate the alleged sexual assault, the source said.

Investigators told the hotel staff to advise him the phone would be taken to him and went to the airport.

Defense attorneys on Monday disputed authorities’ allegations that Strauss-Kahn left quickly after the alleged attack, saying he had a lunch appointment and that his flight to Paris had been booked far in advance.

“It is simply inaccurate, and again it comes from inaccuracies because their rush to do the investigation,” said Brafman.

Strauss-Kahn’s lawyers have declined to identify or characterize the relationship of the person they say was having lunch with their client at the time of the alleged sexual assault. This person, the attorneys say, is willing to testify.

A law enforcement source with direct knowledge of the investigation said Strauss-Kahn was examined for scratches and DNA samples were taken. Strauss-Kahn consented to the testing — the reason his arraignment was pushed to Monday, said another of his lawyers, William Taylor — after investigators were prepared to execute a search warrant, the source said.

Strauss-Kahn’s wife, French journalist Anne Sinclair, defended him in a statement Sunday sent to Agence France-Presse. The couple live in Washington, where the IMF is based.

“I do not believe for one second the accusations brought against my husband,” Sinclair said. “I have no doubt his innocence will be established.” Sinclair called for “decency and restraint,” AFP said.

A former French finance minister, national legislator and economics professor in Paris, Strauss-Kahn became the IMF’s 10th managing director in November 2007. He is also chairman of the IMF executive board.

Deputy head John Lipsky serves as acting managing director while Strauss-Kahn is not in Washington, the IMF said, making him the agency’s de facto leader at least as long as Strauss-Kahn is detained in New York.

Still, the question of immunity — and whether it applies to Strauss-Kahn or to documents and items that he had when he was taken into custody or left behind at the hotel. IMF bylaws say its officials are “immune from (the) legal process” for anything to do with their day-to-day jobs, immigration matters, taxation or other such issues.

The IMF said Monday that Strauss-Kahn was traveling on private business while in New York, having paid out for his Sofitel room out of his own pocket.

Browne said Strauss-Kahn does not have diplomatic immunity in this case nor, to the commissioner’s knowledge, has he claimed it.

CNN senior legal analyst Jeffrey Toobin said immunity is unlikely to apply to Strauss-Kahn regardless, because violent crimes like the one alleged here aren’t covered.

IMF spokesman William Murray said the world body is working with Manhattan District Attorney Cyrus Vance’s office to get IMF documents Strauss-Kahn had with him or left behind at the hotel.

A spokesman with Vance’s office declined comment on whether any such discussions are taking place, saying the matter is part of its investigation.

The IMF spokesman says any such documents are “fully protected” by the the group’s immunities. Its bylaws state that “the fund, its property and its assets, wherever located and by whomsoever held, shall enjoy immunity from every form of judicial process except to the extent that it expressly waives its immunity.”

Police have seized Strauss-Kahn’s cell phone, which he left behind in the hotel suite. A source with direct knowledge of the issue, who requested anonymity, said that any IMF-issued electronic devices, including official phones, are also covered by immunity. It is not clear whether the phone seized by police in Strauss-Kahn’s hotel suite was issued by the IMF.

Strauss-Kahn was scheduled to be the keynote speaker at the Brussels Economic Forum in Belgium on Wednesday. Organizers said Sunday his appearance had not been canceled officially, but they were no longer expecting him to attend.

Because of the incident, some pundits believe Strauss-Kahn’s chances of assuming another leadership role — president of France, a position he sought unsuccessfully in 2006 — have suddenly gone from a strong chance to long shot, if that.

“If the accusations are true, Strauss-Kahn will not be able to run for president,” said Jacques Attali, a former top aide to Socialist President Francois Mitterrand who now serves as a political analyst.