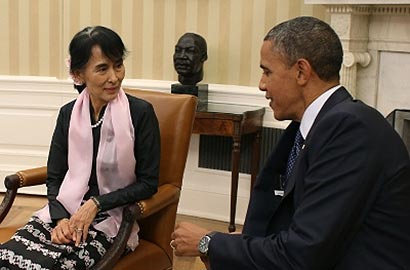 When the US declares a country is of “national interest” it should not be hard to guess the reasons why more so when President Obama himself is to arrive in Burma to start an obvious “US enters Asia” drive on 19 November 2012. The US wishlist is also clear – it wants Burma to be “friends” with India implying to distance from China, US wants Burma to close ties with North Korea, it wants greater autonomy for the Rohingyas at the behest of Saudi Arabia which given the militancy attached to the Rohingyas spells clear dangers of what Burma is likely to face no sooner it shakes hands with the US.

There is so much more to lifting sanctions as Burmese find themselves analyzing the situation far more than Burmese leaders and receiving Congress’s highest award, Aung San Suu Kyi must know the examples of “democracy” that has prevailed in other parts of the world to be cautious of exactly what Burma promises the US when entire Asia realizes that the US has shifted its focus from the Middle East towards Asia in an effort to encircle China. Are we to be witness to a clash of civilizations!

The colonial mission was to Christianize Africa and Asia through missionaries, education and media. We know the extent of that success. From the situations in Afghanistan, Iraq, Middle East and Sub-Saharan/Africa it is clear that the US and allies are arming Islamic militant groups in order to reign down on these nations using the UN doctrine of humanitarian intervention and the significance to countries of Asia with Buddhist populations spells dangers for the future of Buddhists and Buddhism. Where the showdown is likely to be between Evangelized Asia and Islamic militants – for Buddhist this spells dangers for their compassionate philosophy and the future of the Buddhist people in Asia.

Europe is on its way to being Islamized. The fertility rate in the 31 nations of the EU is just 1.38. However as a result of immigration – by 2051 France will be an Islamic republic, by 2030 half of the population in The Netherlands will be Muslim, by 2050 Germany will be a Muslim state. The 52m Muslims in Europe will become 104Muslims in just 20 years.

US has been molly coddling India to sign various military pacts and training programs, US has increased its military presence in Asia, it has struck various military deals with Australia – it is all but gearing for an eventual showdown with China and it is nothing that China is not aware of.

But spectator nations in Asia need to realize the importance of their geopolitical location and must also be concerned about the effects of such a confrontation that may eventually affect their citizens and possibly the future of their nations as well.

Myanmar/Burma is a Buddhist country with a population of 60m people. Myanmar borders 5 countries – China, India, Bangladesh, Thailand and Laos. The Rakhine (Arakan) area is 36,762 square kilometres with a population of 2,045,891 and 40% of it is inhabited by the Rohingyas. Burma was formerly an entirely Buddhist nation following unadulterated Theravada Buddhism but today Buddhists make up 89%, Christians 4%, Muslims 4% and 3% (Hinduism and Bahai faith).

There is no historical evidence to show how or when the Rohingyas arrived in the Rakhine (Arakan) area of Burma but we know they arrived from neighboring Bengal (which included Bangladesh) as the Arakan areas were fertile. If the Rohingyas originated from Bangladesh – they must return to Bangladesh and not attempt to carve out a state in Burma.

The 1891 census reported Rohingyas in the Arakan area as less than 60,000 but the population had climbed to close to 180,000 by 1911. As of 2012, there are said to 800,000 Rohingyas in Myanmar. The projection of Rohingyas as “innocent victims” gets damped by the formation of the Mujahid Party that supported jihad extremism and further intensifies the need to look at the nature of the objective of these Rohingyas to create a separate Muslim state in the Arakan area. Not much prominence is given to this factor nor is there query as to why Bangladesh consistently opposes providing shelter to Rohingyas if they were as innocent as being internationally projected and we know how international NGOs have been susceptible to funds that make them dilute their credibility by the false statements they issue!

Burma has been accused of committing human rights abuses by denying citizenship to Rohingyas but little is said of the Rohingyas attempting to carve out a separate state in the Arakan area while the rest of the small numbers of Muslims that live in other areas of Burma live peacefully with the rest of the Buddhists in Myanmar! Moreover the Rohingyas have formed militant movements – the Arakan Rohingya National Organization, the Arakan Rohingya Islamic Front all setting out to carve out a state in the Rakhine area of Burma. No one is willing to dispel the accusations that the Rohingyas are terrorists being trained and instructed to carry out mayhem in Myanmar in order for the UN to create another Kovoso – this is obviously the plan of US for Asia!

It was in 1973 that Bangladesh used the Rohingyas to set up a Rohingya state with a proxy Government in Myanmas’s Rakhine area. Can the CIA deny that it trained the Rohingyas in the 1980s and 1990s nor can Al Qaeda deny links with the Rohingyas which means plenty of monetary support from Saudi Arabia all in cooperation with the CIA which the UN is well aware of.

When Burma arrested 2 employees of UNHCR and WFP in July 2012 and sentenced them in August 2012 for their complicity in manufacturing the violence between Rohingyas and Burma Buddhists there were no UN panels or investigations launched. It is an open secret that the UNHCR and the WFP are working on behalf of foreign intelligence in Myanmar. The UN is well aware of the Rohingyas being trained as mercenaries – the question is what is it doing about it?

If a superpower such as the United States of America is showing surprised focus on Burma by arranging President Obama’s first visit to a Buddhist nation and the focus is on the Rohingyas and the Rakhine state it is because this region in the Greater Mekong area is home to natural resources (oil an gas – with 2 projects on the pipeline which reduces Bangladesh’s access to both) and is the perfect means of encircling China! Rohingyas and Buddhist Burmese are simply pawns in a game played by superpowers assisted by the UN.

The Rohingyas finds their roots in Bangladesh a country carved out by India in 1971 though not being a party to the UN Convention of the Refugees, Bangladesh is not obligated to accept Rohingyas though 300,000 of them continue to live amongst 160m Bangladeshi’s. Modern Bangladesh though predominately Muslim there are enough of ancient inscriptions to prove Buddhism existed in Bangladesh with many monasteries and over 6000 Buddhist monks coupled with the archaeological excavations to show that Buddhism prevailed in Bangladesh far before it was turned into an Islamic state. Presently there are over 1m Buddhists in Bangladesh with Dhaka having 4 Buddhist temples but the obvious destruction and targeting of Buddhists was made clear when 25,000 Muslims gathered to destroy thousands of year old Buddhist artifacts, Buddhist homes, rare sculptures and monasteries and one wonders whether intelligence outfits are at play to create foul play.

It is in examining US inroads into Asia that we cannot escape the role of India of being Asian or pro-US in policy and action. India was a vast stretch of territory that was consolidated and Christened as British India and encompassed Southern Nepal, Assam, State of West Bengal and Eastern Pakistan. Assam too is on its way to becoming a Muslim majority state which spells the need for India to be concentrating on protecting its own borders that are being targeted from all corners in another strategy to balkanize India using the very same divide and rule policy used by the colonialists.

The situation that is taking place is Burma has not had the support of the Buddhist world as Burma deserves and Sri Lanka too is to be faulted for not taking the lead Mrs. Bandaranaike took to ensure Sri Lanka remained a strong Buddhist nation. Buddhism should never be afforded a ceremonial status as is happening even in Sri Lanka to appease voters and donors. It is evident that nations are being infiltrated by Islamic militants sponsored by intelligence agencies to create turmoil and eventually promote Balkanizing of these nations using religion. The versions are being misconstrued and manipulated by media who today are entities paid to tell versions of their sponsors making Buddhist nation’s victims of the media including Sri Lanka.

We must note that Burma is fighting to protect its Buddhist identity and other nations like Sri Lanka may soon face the same fate. Therefore the onus is on the rest of the Buddhist world to come together to protect Buddhism and not allow it to be destroyed any further. Asia equates to mean the power of Buddhism and that is where Sri Lanka must take the lead and that is how Sri Lanka and Asia can remain united.

Sri Lanka’s diplomacy must be proactive using the soft tools it has before it yet how far diplomacy is used effectively to carve out Sri Lanka’s role in the Indian Ocean by the very person who sang hosannas for the 2002 ceasefire agreement remains a big question mark and answers many questions as to why Sri Lanka’s foreign diplomacy remains in lethargy.