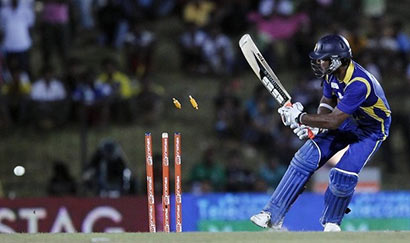 Former skipper Kumar Sangakkara’s fighting knock of 133 went in vain as Sri Lanka lost their first one-day international against India by 21 runs to give the visitors a 1-0 lead in the five-match ODI series at the Mahinda Rajapaksa International Cricket Stadium in Hambantota, Sri Lanka on Saturday.

Chasing 315-run target, Sri Lankan innings ended up at the score of 293 for 9 after the end of stipulated 50 overs.

Paceman Umesh Yadav finally got rid of former skipper Kumar Sangakkara when he was cleaned up at the score of 133. Sangakkara slammed 12 boundaries during his fine knock.

Kumar Sangakkara held the one end for Sri Lanka as he scored his 14th ODI century in the process but could not finish off the proceedings in Lanka’s favour. Sangakkara scored his century in 125 balls with the help of nine fours.

Irfan Pathan dismissed Thisara Perera, who played a fine cameo of 28-ball 44 that included three fours, towards the closing stages.

Zaheer Khan scalped Angelo Mathews to take his first wicket of the innings that increased Sri Lanka’s worry of chasing down the huge target.

India’s Ravichandran Ashwin broke the second wicket 77-run stand between Upul Tharanga and Kumar Sangakkara by removing the former in the first ODI of the five-match series against Sri Lanka in Hambantota.

Tharanga played patient knock of 28 off 47 balls with the help of two fours.

Tharanga and Sangakkara revived Sri Lankan innings after losing Tillakaratne Dilshan in the second over of the innings. Irfan Pathan struck in his first over to remove Dilshan and give India crucial breakthrough in the day-night one-dayer.