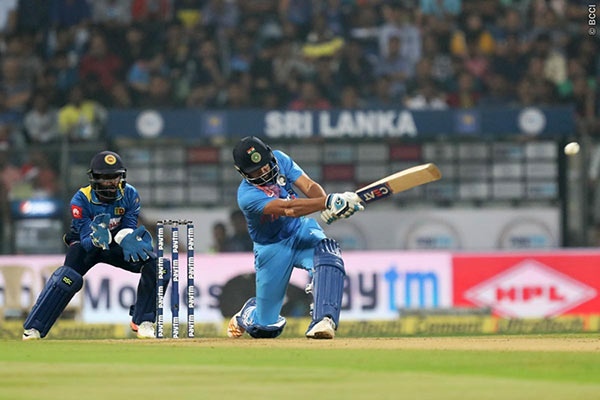 India completed a 3-0 series sweep against Sri Lanka on Sunday following their five-wicket victory in the final Twenty20 International at the Wankhede Stadium in Mumbai.

Chasing a modest 136 for win, the hosts lost opener Lokesh Rahul early but stand-in skipper Rohit Sharma made 27, Shreyas Iyer chipped in with 30, and Manish Pandey topscored with 32 to set India on course for victory.

Sri Lanka’s bowlers did manage to inject some excitement towards the end, leaving India needing 15 runs from the last 12 balls.

Dinesh Karthik, who remained not out on 18, then hit Nuwan Pradeep’s final delivery in the penultimate over for a six to tilt the balance in the hosts’ favour.

Mahendra Singh Dhoni, who made 16 not out, sealed India’s victory with four balls to spare when he sent Thisara Perera’s miscued yorker to the leg-side fence.

Earlier, India’s bowlers laid the foundation for their win by restricting Sri Lanka to a modest 135-7 after Sharma won the toss and opted to field.

Asela Gunaratne made 36 and Dasun Shanaka scored 29 not out down the order but Sri Lanka could not put enough runs on the board to give their bowlers a fighting chance against their hosts.

India, who beat Sri Lanka 1-0 in the three-test series, prevailed 2-1 in the one-dayers before stretching their domination in 20-overs.