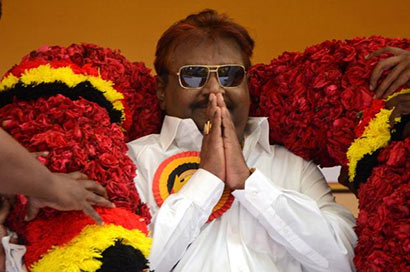 Desiya Murpokku Dravida Kazhagam (DMDK) chief Vijayakanth on Sunday demanded that India should boycott the Commonwealth Heads of Government (CHOGM) summit in Sri Lanka as it would give ample opportunity for the island nation “to legitimise its war” against the Tamils.

“If our nation is going to participate in the Commonwealth Summit, it would pave the way for Sri Lankan President Mahinda Rajapaksa to claim that ethnic cleansing was not reported in his country,” he said in New Delhi.

Mr. Vijaykanth, who is the Leader of Opposition in Tamil Nadu, visited Delhi to address a public meeting organised by his party at Jantar Mantar in New Delhi, pressing for basic livelihood needs for Tamils living in the national capital.

He criticised political parties which did not heed to his appeal for boycotting the Lok Sabha elections in 2009 to save Sri Lankan Tamils.

“These parties, which are now giving a call for boycotting Commonwealth Summit, declined to consider my plea to boycott the last Lok Sabha elections,” he added.

Refuting reports that he was in New Delhi for holding discussions with Congress for alliance, he said, “I am not in Delhi to meet somebody, but only to voice the concerns of Tamil people.”

However, the DMDK founder said that he would ally with political parties that would agree to his conditions.

The actor turned politician also faulted the statements of DMK and AIADMK leaders on sacrificing their lives for the welfare of Tamils.