India to suppport US resolution 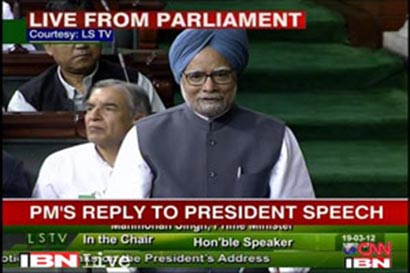 New Delhi: In a victory for the DMK and the AIADMK, Prime Minister Manmohan Singh on Monday said that the government intended to vote in favour of the US-led resolution against Sri lanka at the United Nations Human Rights Council (UNHRC), but the final draft of the resolution was awaited.

Speaking on the issue of alleged war crimes and Tamils in Sri Lanka, Manmohan Singh said, “India has stressed on reconciliation and healing the wounds of the Lanka Tamils. We have asked Lanka govt to stress on meaningful devolution of power.”

The Prime Minister also claimed that normalcy was returning to the Tamil areas of Sri Lanka.

The DMK and the AIADMK had been stepping up pressure on the Centre to vote in favour of the resolution and take a strong stand against Sri Lanka.

The resolution demands those found guilty of war crimes against Lankan Tamils be declared as war criminal.

While the DMK indicated a review of ties with the UPA, AIADMK chief and Tamil Nadu Chief Minister J Jayalalithaa wrote to the Prime Minister to take up the issue of war crimes with the United Nations.

DMK chief Karunanidhi had said, “DMK will deem it as betrayal of Tamils if Centre does not support US resolution on Lanka. I can’t decide on withdrawing support to Centre on this. We would discuss and decide in our executive meet.”

Earlier, DMK MP Kanimozhi also hoped that the Centre will “not push” the party to take a decision on its continuance in the government over India’s stand on the US-sponsored resolution against Sri Lankan Government in the UN Human Rights Council.

7 Responses to India to suppport US resolution

Home » India to suppport US resolution