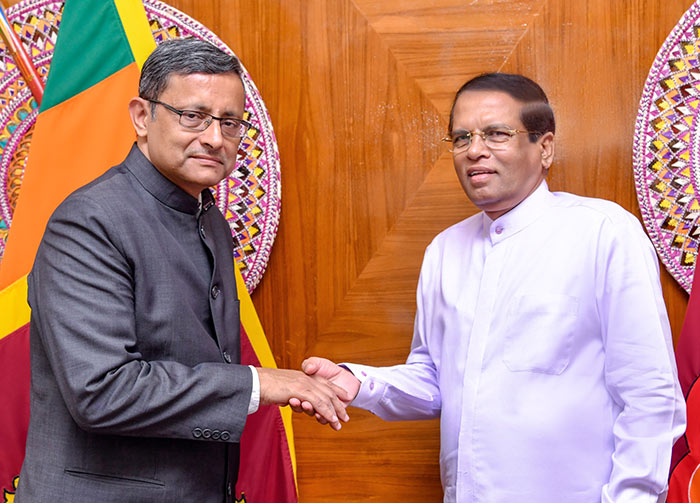 Soon after the meeting, the President’s office issued a statement saying India and Sri Lanka have agreed for enhanced cooperation in the areas of security and defence including regional security. Also, India has agreed to train Sri Lankan defence personnel, it said.

Training of Sri Lankan defence personnel in India became an explosive issue during the tenure of late AIADMK leader Jayalalithaa as Chief Minister in Tamil Nadu. She had demanded the expulsion of two Sri Lankan officers from the Defence Staff Services College in Wellington near Ooty and the Indian Defence establishment had to relocate them in a training facility elsewhere in the country.

With the crucial elections only days away, the announcement from Colombo that it has been able to secure training facilities for its military officers in Indian defence establishments could embarrass the BJP-AIADMK coalition in its campaign for the April 18 poll.

While the politicians and pro-Eelam activists in Tamil Nadu have been stoutly opposed to India providing training facilities for the Sri Lankan military personnel, the Indian Government is justifiably concerned that shutting the doors on Colombo would push the Sinhala rulers deeper into the embrace of the enemy — Pakistan and China — who have offered similar training and military collaboration offers.

Arriving on a two-day visit to Sri Lanka on Sunday, Mitra has started on a long string of high-level meetings aimed at strengthening defence cooperation between the two neighbours at a time when there is much consternation in India over Colombo’s excessive engagement with China.

Mitra is also meeting his counterpart Hemasiri Fernando and chief of defense staff Admiral Ravindra Wijegunaratne, besides visiting the central town of Kandy and the north central town of Anuradhapura.