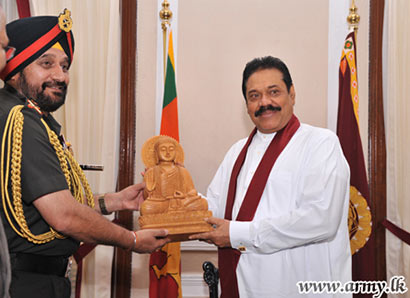 HE the President Mahinda Rajapaksa, who is also the Commander-in-Chief of the Sri Lankan Armed Forces cordially welcomed the visiting India’s Chief of Army Staff General Bikram Singh, PVSM, UYSM, AVSM, SM, VSM, ADC Thursday (20) noon when the latter paid a courtesy call on him at Presidential Secretariat, accompanied by his Sri Lankan host, Lieutenant General Jagath Jayasuriya, Commander of the Army.

President Rajapaksa during his brief meeting with the visiting Chief of Army Staff of the Indian Army recalled landmark relations that continue to exist between both countries and underlined the need for further fostering of such cooperation and understanding since both nations are the closest neighbours to each other in the Indian ocean.

General Singh towards the culmination of the courtesy call on the Sri Lankan President, presented HE the President with a token of memory that signifies the memory of his visit to the Presidential Secretariat.

Just minutes after his audience with the President, General Singh, together with his Sri Lankan host, called on Mr Gotabaya Rajapaksa, Secretary Defence and Urban Development at his office in the Ministry of Defence.

During the brief meeting with Mr Gotabaya Rajapaksa, a few matters of interest to both military organizations were taken up for review and perusal. Exchange of mementos at the same occasion ended the programme with the Ministry of Defence as the visiting Indian Army Chief was scheduled to attend the remainder of the day’s itinerary.

As the final segment of his Thursday’s agenda, the visiting Chief of Army Staff of India General Bikram Singh, is scheduled to pay his respect to the memory of fallen Indian Peace Keeping Force (IPKF) War Heroes during late 1980s in Sri Lanka at the memorial at Battaramulla this evening when the IPKF troops were deployed to counter LTTE terrorism in Sri Lanka at that time under the Indo-Lanka Accord.

The Indian Chief of Army Staff General Bikram Singh, accompanied by the Commander, Security Forces Headquarters – West in attendance, is scheduled to place a floral wreath at the IPKF Memorial at Battaramulla and salute the memory of IPKF brethren in a solemn moment of remembrance.

Gen Bikram Singh, PVSM, UYSM, AVSM, SM, VSM, ADC was commissioned into The Sikh Light Infantry Regiment in 1972. He is a graduate of the Defence Services Staff College, Wellington, the Higher Command Couse at Mhow and the US Army War College, Pennsylvania, USA, where he also won the ‘International Toastmasters Award’ in Public Speaking.

During his 40 years of eventful military career and active service, he has held a number of very important Command and Staff appointments, He commanded an Infantry Battalion in the North East (NE) and on the Line of Control (LC) in Jammu & Kashmir (J&K). Thereafter, he commanded a Rastriya Rifles Sector in South Kashmir during the peak of terrorism in J&K. As a Major General, he commanded an Infantry Division again on the LC in J&K and later, on promotion, commanded the prestigious 15 Corps based in Srinagar and then the Eastern Command.

He has also served in three UN Peacekeeping Missions in Central America and Africa. In his last assignment, he was the Deputy Force Commander and General Officer Commanding of a Multinational Division in the Democratic Republic of Congo, which contributed immensely in the initiation of ‘Goma Peace Process’ and subsequently, in the implementation of various stability and developmental initiatives in the strife torn Eastern Region of the country. He has also participated in a number of peacekeeping and disaster management seminars abroad and delivered talks on various facets of peacekeeping operations and leadership challenges.

The General Officer has also had varied experience at the Army Headquarters, which includes two tenures each in the Military Operations and Perspective Planning Directorates and one as the Director General of Staff Duties. During these tenures the General Officer, inter alia has dealt with some important subjects like the Counter Terrorism and Insurgency Operations, Management of Borders along with various aspects relating to the planning and conduct of Conventional Operations, Aid to Civil Authority, Formulation of Doctrines and Long Term Perspective Plans for the Indian Army, Defence Cooperation, Deployment of Training Teams abroad and overseeing the Operations of Indian Contingents in the UN Missions, During the Kargil war, he conducted regular media briefings as the Army’s spokesman.

He was awarded PVSM, UYSM, AVSM, SM, VSM for distinguished and dedicated service in command and staff. Besides holding two Master’s Degrees from India, he has also a Masters in Strategic Studies from the US Army War College.