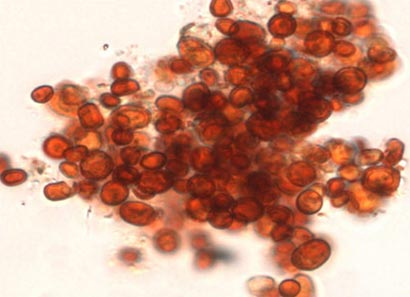 Dr.Chandra Wickramasinghe of the Buckingham Center for Astrobiology in the Buckingham University , UK said the cells found in the Red Rain collected in Sri Lanka according to preliminary investigations contain high concentrations of arsenic and silver and “that makes them extremely unlikely of any earth origin.”

Wickramasinghe who had just returned to the Buckingham University with several samples of red rain collected in Sri Lanka for further analysis added that he has had extensive discussions with Dr. Anil Samaranayaka of the Medical Research Institute (MRI) of Colombo Sri Lanka whose preliminary investigations he has reviewed on the subject and during the same time and in the same areas the red rain has been witnessed fire balls and carbonaceous condritic stones have been evidenced.

In an email interview with this correspondent Dr. Wickramasinghe said all these factors point to an extra terrestrial origin of the red rain.

In the interview he said, “I have just returned from Sri Lanka where I have had extensive discussions with Dr. Anil Samaranayake, Director of the MRI, Ministry of Health. I have reviewed the work they have done so far, and can confirm that the red rain contains an organism that has not been identified with any known terrestrial organism. Dr. Samaranayake’s team have reported high concentrations of silver and arsenic in the organisms, that make them extremely unlikely to be of Earth origin. Further work is to be done in collaboration with Dr. Samaranayake on samples that I have brought to the UK. The fact that several episodes of red rain were accompanied or followed by sightings of fireballs makes it clear very likely that there is a connection. Also the fact that chondritic stones have been collected from sites where sightings were reported points decisively to an extraterrestrial origin of red rain, meteorites and fireballs in my view.”

The following joint statement of Dr.Samaranayaka and Wickramasinghe has appeared in Buckingham University website: From mid-November to early-December of this year Sri Lanka witnessed a rare conjunction of natural phenomena, all pointing to the skies. Frequent sightings of meteors (probably the Leonids) were followed by numerous reports of fireballs, some of which actually resulted in the recovery of carbonaceous meteorites. Interest in all these events was heightened due to several episodes of red rain that fell in the same general timeframe and in the same locations. The red rain phenomenon of Sri Lanka was strikingly similar to the red rain of Kerala that was featured in a cover story in New Scientist of 4 March 2006.

Preliminary examination of the Sri Lankan red rain has shown the presence of red cells almost identical to the Kerala red rain cells. However, despite several years of study by various groups, the Kerala red rain cells have not yet been convincingly identified, and an extraterrestrial origin of the cells still remains a possibility. In the case of the Sri Lankan red rain cells, the mystery deepens with chemical analysis that shows them to contain unusually high concentrations of the elements arsenic and silver. The arsenic abundance is, however, less than a per cent of what would be required if phosphate groups in DNA are to be replaced by arsenate groups, as was recently suggested in studies of the bacterium strain GFAJ-1 of the Halomonadaceae (Science 332, 1163,2011), isolated from Mono Lake, California.

It would be tempting to connect the meteors and fireballs with the red rain events experienced in Sri Lanka during November and December 2012. Meteor showers (e.g. the Leonids) occur at regular times in the year whenever the Earth in its orbit crosses the trails of debris from short-period comets. Whilst centimetre-sized particles entering the atmosphere at high speeds burn-up as meteors or shooting stars, larger cometary fragments, containing dust and in some cases living cells, could disperse their particulate content non-destructively into the atmosphere. Many years ago E.G. Bowen (Nature 117, 1121, 1956) discovered a connection between freezing nuclei in tropospheric rain clouds and the incidence of extraterrestrial particles from meteor streams. It was found that as dust from cometary streams (which may possibly include red rain cells) is introduced into the troposphere, heavy rain follows some 30 days later. Larger cometary bolides in a meteor stream that do not disintegrate could end up as fireballs and meteorites that fall to the ground.(EOM)