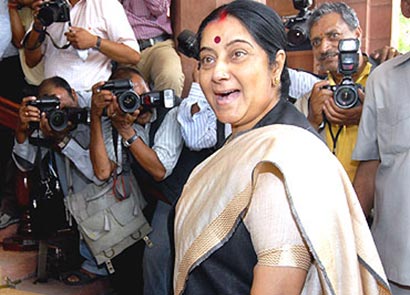 In response to Chief Minister Jayalalitha’s allegation that the Indian parliamentary team would become a public relations event for the Rajapaksa’s other than serving any useful purposes India has announced that the Indian delegation would get the opportunity of interacting with all elected parliamentarians of the Tamils when they visit the island April 16.

They will have an opportunity to speak to all groups of Tamils in Sri Lanka – those in the Northern Province, Eastern Province, in the hills, and in Colombo according to the schedule.

“Led by the Leader of Opposition in the Parliament, Sushma Swaraj, the delegation arrives in Colombo late on April 16, and has a packed programme schedule ahead of leaving on April 21. The next morning, the delegation will meet Minister for Economic Development Basil Rajapaksa, before meeting the External Affairs Minister, G.L. Peiris.

“The team will head to the Sri Lankan Parliament, where they will meet Basil’s brother and Speaker, Chamal Rajapaksa. They will also interact with Sri Lankan MPs, and attend a lunch. The team will meet representatives of the Tamil National Alliance (mostly elected by the northern Tamils), the Sri Lanka Muslim Congress (largely represent the Muslim dominated east), and the Ceylon Workers Congress (who stand for the plantation Tamils), the same day.

“A dinner hosted by the Indian High Commissioner, Ashok K.Kantha, will give the delegation an opportunity to interact with prominent Colombo-based Sri Lankans and Indians.

“The delegation will visit Medawachchiya on April 18. Medawachchiya is the site of the largest IRCON base facilities, as they rebuild the northern Railway of Sri Lanka. IRCON representatives will brief the delegation on the projects. Soon after, the delegation leaves for Mullaitivu, where they will witness a slew of projects being carried out – handing over of equipment for a Government Hospital, handing over some units of the dragging Housing Project, inaugurating repaired schools, and handing over bicycles.

“The Security Forces Commander will brief the delegation on the progress on various fronts. The delegation travels to Jaffna, where it will interact with MPs and civil society representatives. The delegation will stay over in Jaffna for the night. The next day, the delegation will visit Kankasanthurai Harbour, where India had carried out a US $ 20 million wreck removal operation recently. The Harbour is being rehabilitated, and is expected to begin trade with Nagapattinam, about 60 km away, shortly.

“The same day, the team will visit the southern railway project at Kaluthara and witness the handing over of the completed section. It will also meet the Leader of Opposition in the Sri Lankan parliament, Ranil Wickramasinghe.

“The delegation has one day, April 20, to visit the east and the hills, to meet people. At Batticaloa, where a host of statues were recently vandalised, including one of Mahatma Gandhi, the delegation will meet Chief Minister, a former LTTE child soldier Pillayan (Sivanesathurai Santhirakanthan), and visit some projects. In the hills, it will visit Dickoya, the place where a hospital is coming up with Indian support.

“The last day, April 21, the delegation will meet President Mahinda Rajapaksa over breakfast.”