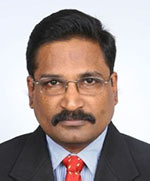 Professor Godfrey Louis Pro Vice Chancellor of the Cochin University of Science and Technology of Kerala, India hailed the discovery of life in the Polonnaruwa meteorite as a major development in the search for extraterrestrial life.

Professor Louis is the pioneer scientist who drew the attention of the whole world to the strange phenomenon of the Kerala red rain and in the following email interview with this correspondent flatly rejected the opinion expressed in the state owned press in Sri Lanka that the coloured rain experienced in the island was the result of the spores of some lichens getting mixed in the rain water.

Professor Chandra Wickramasinghe and his team from United Kingdom universities recently announced that they discovered proof in the Polonnaruwa meteorite that we are not alone in the universe.

The following are questions we sent by email and the replies Professor Louis sent us from Kerala ,India.

(1) As a pioneer in bringing the red rain to the attention of the world of science how would you compare the Kerala red rain to that of Sri Lanka?

Both these events of red rains which happened in Kerala in 2001 and in Sri Lanka in 2012 appear to be almost the same kind. Same kind of red cells are involved in both cases. The spatial and time distribution patterns are very similar. So it can be inferred that same mechanisms are behind both phenomenon.

I have not yet had an opportunity to examine the red rain samples from Sri Lanka but hope to do so in near future. I am in contact with Professor Chandra Wickramasinghe who has started examining the cells. I shall also be contacting some scientists in Sri Lanka.

To the best of my knowledge Government of India neither announced any official explanation for the red rain phenomenon of Kerala nor commissioned any study on this. Two institutions in Kerala “Centre for Earth Science Studies” and “Tropical Botanic Garden and Research Institute” jointly submitted a report to the Kerala State Government in November 2001. In this report they claimed that “the coloured rain in many parts of the state is due to the presence in rainwater of significant quantities of coloured lichen-forming algal spores of local origin”. None of the scientific studies published after this supports their claim.

(4) Are there any connections with the Kerala red rains and lichens?

Kerala red rain and lichens have no connection. Lichens are very slow growing organisms. They have no mechanisms to eject large quantities of spores in a short time. According to our published estimate a total of more than 50000 kilograms of red rain cells have fallen in Kerala over widely separated geographic locations. High resolution optical and electron microscopy images published by us are sufficient evidence to infer that the red rain cells are not the claimed lichen or algal spores. Red rain cells are the spores of an unknown type of highly thermophilic microorganism.

(5) The Sri Lankan red rain started in November and continued till December last year. How would you take such a huge mass of red cells to have come down on earth in a limited area?

According to our theory, fragments of a comet (which contain red cells) on entering the earth’s atmosphere from space can disperse large quantity red cells in the upper atmosphere. Being microscopic in size these cells will take long time to settle down to the rain clouds below. This explains the extended time distribution of the red rain events.

(6) If this was a botanical source what are pros and cons of the phenomena.

The red rain cells are not algal or lichen spores.

(7) Have you investigated the claim that the red rain was due to a algal bloom blown up from the trees?

We have studied and published the geographical and time distribution pattern of the red rain events in Kerala. The observed pattern cannot be explained by algal bloom blown up from trees.

(8) How would you disprove the possible causes of dust from Sahara, volcanic dust from distance, fungal spores from trees and algae from sea for red rain?

Optical and electron microscopy clearly show that the particles are not dust but they are biological cells. Chemical composition studies show that the material is clearly organic. This disproves the possibility of Sahara dust and volcanic dust. Further, microscopic particles coming from distant source will get spread out over a wide area and cannot appear concentrated in small locations for durations like 15 to 20 minutes as observed in red rain events. Systematic airlifting of massive quantities of fungal spores from trees or algae from sea to rain clouds for more than two months appears meteorologically impossible. If tones these cells were lifted from trees or sea then these must be a common organism. But no such clear identification is so far available. Our studies show that the red rain cells are the spores of a new kind of highly thermophilic microorganism.

(9) How would you connect the Sri Lanka red rain with panspermia?

In the theory of panspermia one of the possible mechanisms for spreading life in the universe is through comets. While the comets appear as a very cold and frozen body the core region can have hot liquid water due to radioactive heating. Comets also contain abundant organic materials. Microorganisms adapted to this environment can grow and multiply inside a comet. Red rain organism is assumed to be of comet origin. Hence red rain events of Kerala and Sri Lanka are possible cases of cometary panspermia.

(10)Some of your colleagues like Chandra Wickramasinghe and Milton Wainright did not agree with your view of no DNA in red rain cells. Have you changed your view?

(11) Why is it the red rain cells divide at 121 degrees celcelsius according to you?

Red rain organisms are highly thermophilic unusual microorganisms. Our experiments show that they can grow at 300 degree C. In a particular experiment done independently at UK the production of daughter cells were observed when red rain cells underwent prolonged hydrothermal heating at 121 degree C. This is an independent confirmation of our claim that red rain cells are highly thermophilic microorganism.

This simply supports our claim that red rain has space origin.

(13)It was reported by the Medical Research Institute in Sri Lanka that they found silver and arsenic in high quantities in the red rain samples. How do you explain that?

In Kerala red rain the presence of Silver and Arsenic was not observed. It requires more study on the Sri Lankan sample to explain.

(14)Both in Sri Lanka and Kerala the coloured rains came down in the midst of the raining season and not at the beginning. Do you have a special reason for it?

Red rain can be observed only if there is good rainfall. In the absence of rain fall the incoming microbial red dust will be diluted and spread by the tropospheric winds and no one will observe a red rain. If there is abundant rain clouds as in the midst of raining season and the entry of comet fragments coincide with that then that would result in red rain events. The microbial red dust will interact with rain clouds and possibly act as seed for condensation and red rain should follow.

(15) What are your comments on the claimed discovery of life by Professor Chandra Wickramasinghe and his team in the Polonnaruwa meteorite recently?

Finding of fossil diatoms and red rain cells in the Sri Lankan meteorite by Professor Chandra Wickramasinghe and his team is a major development in the search for extraterrestrial life. When the presence of red rain cells in the meteorite are confirmed under further studies, it is going to prove our hypothesis that red rain cells are of extraterrestrial origin. The porous structure of the meteorite is particularly interesting as it can support liquid water and life. Core region of large comets are expected to have liquid water due to radioactive heating.