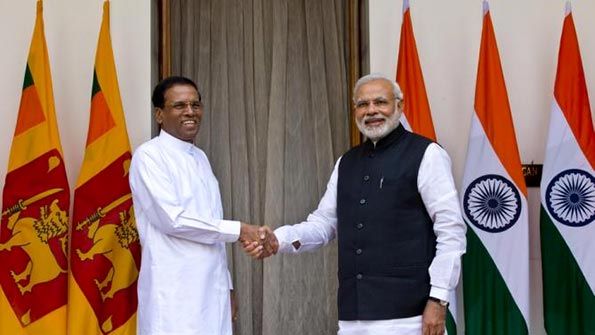 Narendra Modi will become the first Indian leader to visit Sri Lanka’s war-torn Tamil heartland this week, sending a powerful message on reconciliation to the new government in Colombo.

It is part of a tour of Indian Ocean nations that will also take in the Seychelles and Mauritius — although not the Maldives, where the arrest of former president Mohamed Nasheed has triggered a political crisis.

But the main focus is on Sri Lanka, where new President Maithripala Sirisena has vowed to reduce Beijing’s influence and address the grievances of the island’s approximately three million Tamils.

“Obviously, the intent is to strengthen our overall ties with Sri Lanka and this has many aspects because we have a very broad-based, substantive relationship with that neighbour,” India’s Foreign Secretary S. Jaishankar said in New Delhi on Monday.

“Politically, we clearly want to promote and encourage the reconciliation process, support democracy and reform.” Jaishankar said the two countries were discussing how the around 100,000 Tamil refugees still living in India, many of them in government-run camps, could return to Sri Lanka “with honour, dignity [and] safety”.

Hundreds of thousands of Tamils fled to India at the height of the 26-year war between Sri Lankan forces and Tamil separatists that ended in 2009. They share close cultural ties with the southern Indian state of Tamil Nadu and many Indians were angered by their treatment under the former regime.

Rajapaksa won acclaim for leading a crushing military victory over the Tamil Tiger rebels, ending a war that had claimed some 100,000 lives.

But his failure to bring about post-war reconciliation bred resentment among Tamils and led to international criticism over human rights.

Modi will travel to the Jaffna peninsula — Sri Lanka’s northern Tamil heartland and scene of the worst fighting — on Saturday after addressing parliament in Colombo on Friday.

He is only the second foreign leader to visit the battle-scarred region after British Prime Minister David Cameron, who travelled there during a Commonwealth summit in Colombo in November 2013.

While reconstruction has begun in some parts of Jaffna city, many neighbourhoods and surrounding villages are still strewn with rubble as a legacy of the heavy bombardments that they endured over the decades.

Tens of thousands of troops are still garrisoned in Jaffna despite international calls for a scaling-back of numbers.

“For the first time in a decade, the domestic impetus for peace and reconciliation within Sri Lanka is as strong or even stronger than the Indian capacity or even desire to push for a solution,” said Indian political commentator Siddharth Varadarajan.

“That said, Modi is likely to encourage both the government and the TNA (Tamil National Alliance) leadership to move swiftly ahead.”

Indian troops withdrew from Sri Lanka in March 1990 after an acrimonious 32-month deployment in the northern and eastern provinces, where they lost over 1,140 troops at the hands of Tamil rebels.

Since then, New Delhi has maintained a largely hands-off policy, but remained concerned as Sri Lanka’s conflict remained an emotional issue for Indian Tamils.

Analysts said Modi’s visit would help build momentum for greater autonomy in Tamil areas after successive governments in Colombo failed to devolve power over law and order and land to provincial councils.

But they said the visit would focus largely on trade and investments.

Sirisena’s government has already ordered a review of all Chinese-funded infrastructure projects and aims to reduce Beijing’s interest in the economy by trying to pay off expensive Chinese loans.

“There is tremendous optimism in both capitals of making progress on a host of economic and political issues. After losing ground to China, India hopes to re-establish its importance as Sri Lanka’s top economic and strategic partner.”