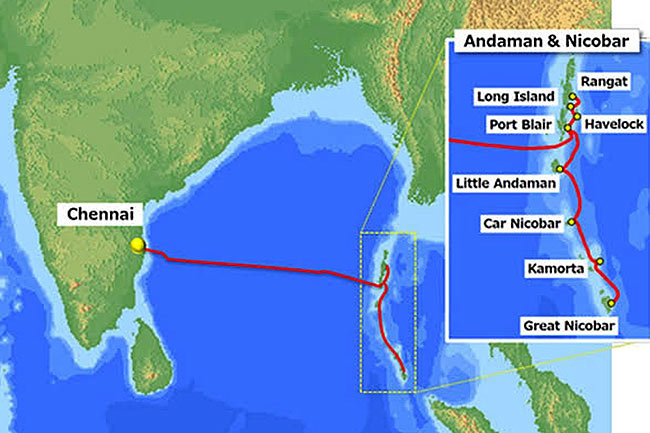 India is planning to build a new transshipment port in the Great Nicobar Island in the Bay of Bengal.

Sri Lanka’s neighbouring nation ventured into this investment of INR 10,000 crore taking into account the strategical importance of the Great Nicobar Island.

The proposed transshipment port will be established on the Great Nicobar Island, the southernmost and the largest of the Nicobar Islands of India, located at the mouth of the Strait of Malacca, the main shipping channel between the Indian Ocean and the Pacific Ocean.

Being one of the most important sea routes, more than 90 percent of crude oil volumes flowing through the South China Sea transit the Malacca Strait.

Indian media reported that the port is also located strategically near the proposed Kra Isthmus Canal, also known as the Thai Canal, connecting the Gulf of Thailand with the Andaman Sea and shorten transit for oil shipments to Japan and China by 1,200 km.

Accordingly, the Indian government intends to build a duty-free warehouse complex in the southern part of the Nicobar Islands and to set up a container transshipment centre.

It is expected to be an alternative for Colombo Port, which is currently the major transshipment hub in the region, as well as the Singapore and Malaysia’s Port Klang transshipment ports.

After the ownership of Hambantota Port was acquired by China, India had been keen on securing the East Container Terminal of the Colombo Port as a transshipment port. This was met with strong opposition by trade unions of the port.

However, topographic maps show that the proposed transshipment port of India is located in an area that has been subject to frequent earthquakes in the past.

The latest earthquake that hit Andaman and Nicobar Islands was of 4.8 magnitude and it was reported on the 17th of July this year.

The epicentre of the earthquake was 250km east of Port Blair, the capital of the Andaman and Nicobar Islands.