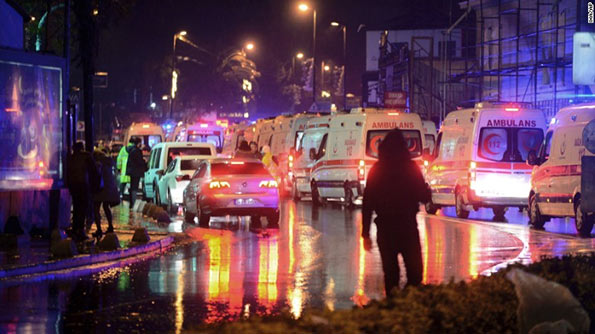 A manhunt is underway in Turkey for an unknown attacker who opened fire on New Year’s revelers in an Istanbul nightclub.

At least 39 clubgoers were killed and nearly 70 were hospitalized after the suspect entered the Reina nightclub early Sunday and started shooting. The victims hailed from 14 countries, according to Turkey’s semi-official news agency Anadolu.

“There is strong coordination and we will find him, no delay,” he told reporters gathered outside an Istanbul hospital, where Yildirim had been visiting people injured in the attack.

Despite no group yet claiming responsibility, Turkish authorities quickly characterized the attack as the work of terrorists.

“We are face to face with a terror attack,” Interior Minister Suleyman Soylu told reporters Sunday morning, adding, “the efforts to locate the terrorist are ongoing. Security forces have begun the necessary operations. God willing soon (the attacker) will be apprehended.”

World leaders, including Pope Francis, condemned the shooting. US officials also called it a terrorist attack, making it the first of 2017.