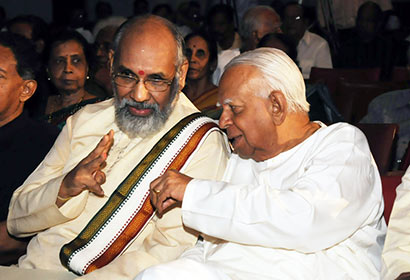 Chief Minister Wigneswaran says Tamil people have rejected separatism. That may be but what about Tamil politicians, have they rejected separatism is the more important unanswered question. Linked to this is the very ugly manner in which across the world knowing they are telling lies, the Tamil political parties and part of LTTE Tamil Diaspora are continuing to project a notion of oppression and discrimination and claiming without a figment of proof a Tamil Homeland. Why has the UN, its Special Representatives, the UN Human Rights head, the International Community alongside media and HR groups preferred to keep silent on this fundamental right being denied to Sinhalese & Muslims to live, own lands and carry out business throughout North Sri Lanka.

Spearheading the ‘Only Tamils have a Right to Live in North Sri Lanka’ campaign is the ITAK-TNA and a host of Tamil Diaspora elements who have hardly any desire to even visit Sri Lanka but quite happy to while holding foreign passports run a global campaign for an Eelam. We have repeatedly questioned the nature of this new Eelam and satisfactorily proved that the promoted Eelam is certainly not for Hindu Tamils, something the Indian Central Government needs to take cognizance of for their continued nagging over 13th amendment together with ITAK’s Confederal hidden aim will spell disastrous consequences for both Sri Lanka and India.

The Chief Minister has also spoken not against Sinhala, he says but against Sinhalization that too when both his sons are married to Sinhalese and he himself was born, worked and lived virtually all his life in Colombo amongst Sinhalese and relocated to the North only after winning elections. He lived 70 years in Sinhala area attending one of Sri Lanka’s most popular boys schools and became a Supreme Court judge as well, so much for discrimination. Thus at 74 living a handful of years in the North and over 70 years in the South, he is the least qualified to speak against Sinhalese desiring to live in the North?

Instead of being the perfect example for the West’s dictum on ‘reconciliation’ the Chief Minister is continuing the baseless and irrational logic that seems to approve the Tamilization of South Sri Lanka but is up in arms against Sinhalization of the North. While 10% of Tamils have to be given exclusive rights to call the North their own they also claim to reserve full rights to live in all parts of Sri Lanka while Sinhalese are to be confined to accepting virtual second class citizen status giving into every minority demand although they make up over 70% of Sri Lanka’s population. This is so because the politicians have compromised the rights of the majority for ‘political correctness’ based on their selfish gains and have nothing to do with any oppression, discrimination or majority rule. We need to at some time or the other acknowledge that it is the politicians that have been dividing the people just as much as we complain about foreign interference.

Tamil Homeland, No Sinhalese in the North, Removal of Sovereign Military are all cocky demands and it is unfortunate that at none of the international forums the GOSL envoys and representatives have successfully projected the absurdity of this argument. So instead we have the Sambanthans, Abraham Sumathirans, Sivalingams, Ananthis all going round the world shedding crocodile tears about ‘Sinhalization’ of Tamil areas (while they reside in the South) while not a single voice is heard from the GOSL proving through numbers the absurdity of their argument.

The newly relocated Chief Minister is objecting to ‘militarization’ of the North. We cant recall any statement from him while living in Colombo throughout the LTTE defacto rule of the North objecting to ‘LTTEization’ of the North, or speaking on behalf of the low caste Tamils against LTTE for recruiting their children and turning them into child soldiers. The Chief Minister while living in the South never once objected to LTTE rule openly and with authority, never spoke on behalf of his people in the manner LTTE took over houses, lands and properties and converted them into bunkers or homes for the families of their cadres. Therefore, we find it a bit strange that a man silent for virtually 3 decades suddenly sees fit to object to the military stationed in the North but does not complain when the military are building homes, toilets and other facilities for the Tamil people. This is a perfect example of ingratitude and totally out of line and contributes to ill-will amongst the communities. These rhetoric have gone beyond funny or be excused for immature political behavior. The campaign slogans are now totally stepping out of line and directly affects reconciliation.

Moreover the world needs to make a clear distinction. Sri Lanka fought a terrorist war and that had nothing to do with Tamils so aspirations of the Tamil people have nothing to do with post-conflict discussions and should be dealt totally outside of this framework and the GOSL should not foolishly fall for this trap.

Again a failure of Sri Lanka’s Governments and representatives is their inability to show that LTTE does not represent the Tamils nor did it protect Tamils. LTTE made up of low-castes were quite happy to pick from low-castes in the Vanni and LTTE protected ONLY those that sided with its murderous ways and to this list included foreigners, Sinhalese, UN staff and even Tamils.

Confusing matters has been the TNA-LTTE links rooted to LTTE helping establish TNA as its political arm and now with no LTTE (at least the fighting force) there is a big question how far TNA remains the tiger in civil! The TNA camaflage is unlikely to get exposed until and unless the Tamil people make public this truth. The situation was made worse when India permitted a meeting with Indian Premier and the TNA after declaring that India’s relationship will hereafter be directly with the Sri Lankan Government not allowing State politics to interfere.

The crux of the argument remains the need for the implementation of fundamental rights for Sinhalese and Muslims to live in the North by running a global campaign on ‘Sinhalization’ of the North.

The Tamil populace must remove themselves from their historical silence and acknowledge that if they can freely purchase land, build condominiums, rent them out to only Tamils in the South of Sri Lanka, the Sinhalese and Muslims should have every right to live, purchase lands and carry out businesses in the North of Sri Lanka too.