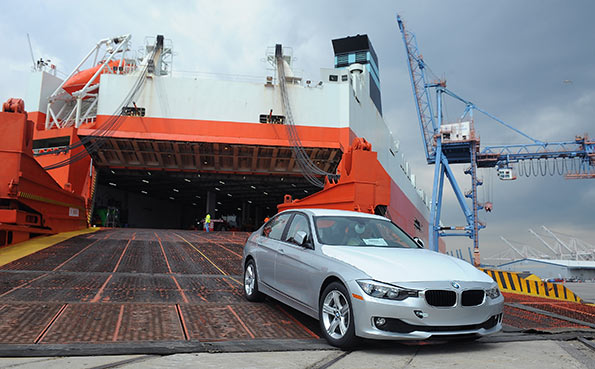 Hambantota port workers held a Japanese vehicle carrier Hyperion Highway and its crew for four days in protest against the proposed agreement between the government and state owned China Merchants Port Holdings Company Ltd to operate the port as a public-private partnership.

Hyperion Highway is one of the largest vehicle carriers in the world.

A senior ABC spokesperson told The Island that the government had been briefed on what he called an extremely volatile situation. “We are deeply concerned about the unexpected crisis involving Japanese K line vessel.”

Both President Maithripala Sirisena and Prime Minister Ranil Wickremesinghe have been briefed on the situation, the spokesman said.

Trouble erupted in the wake of a framework agreement outlining the understanding between Sri Lanka and Chinese State owned Corporate, China Merchants Port Holdings Company Limited to revitalise the Hambantota Port as a PPP.

Government sources told The Island that the agreement had been executed in accordance with the decision of the Cabinet of Ministers.

“A Concession Agreement would be executed upon completion of a due diligence to be performed by the China Merchants Port Holdings Company Limited.”

Workers have demanded that they be absorved by the Sri Lanka Ports Authority (SLPA) as part of the administrative arrangement with the Chinese. At the moment, Hambantota workers operate independently. They said that their employment would be in jeopardy if Hambantota port was brought under Chinese management.

Another senior employee with the local agents told The Island that they were suffering losses amounting to USD 70,000 a day due to the ship not being able to leave as previously scheduled. Having arrived on the night of Dec 5, the vessel had berthed on Dec 6, the ABC official said, adding that they never expected workers to seize the vessel.

Development Strategy and International Trade Minister Malik Samarawickrema said that the government had no alternative but to set up a joint venture with the Chinese. “Our objective is to make the Hambantota port an income generating enterprise retaining its ownership and leasing it on a 99-year lease agreement.”

Due to the failure on the part of the local agents, Hambantota port management and striking workers to settle the dispute, Ports and Shipping Minister Arjuna Ranatunga visited the Hambantota port on Thursday. Minister Ranatunga hadn’t been successful in his attempt to resolve the issue, sources said, adding that the government had been reluctant to use force to take control of the port.

Although, both police and the navy had been alerted, the government continued to negotiate with striking workers.

Wartime Foreign Minister Rohitha Bogollagama yesterday told The Island that seizure of a foreign vessel under whatever circumstances was a very serious matter. Bogollagama said that the incident at Hambantota port couldn’t have taken place at a worse time and certain to dent investor confidence.

Both Japanese and Chinese embassies in Colombo have been closely monitoring the situation.

Sources in Hambantota said that port workers had piled up a mountain of sand on the road leading to the port in a bid to thwart navy vehicles moving in. Responding to another query, sources said that the vessel had been scheduled to pick up some transhipment cargo (vehicles) from India to be taken to Sohar, Oman.

Shipping sources told The Island that the crisis at the Hambantota port would have a debilitating impact on the industry. They said that whatever their grievances, preventing a vessel’s departure wasn’t acceptable. Sources said that law enforcement and military authorities responded cautiously due to uncertain situation thereby delaying tangible measures to end the siege on the vessel.

Sources said that the owners had expressed their serious concerns to local agents in the strongest possible terms.