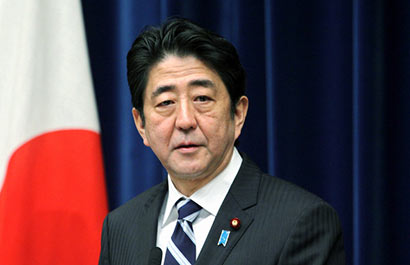 Japanese Prime Minister Shinzo Abe accompanied by by a high level deligation will arrive in Sri La​nka this afternoon.

Sri Lanka and Japan established diplomatic relations shortly after the signing of the SanFrancisco Peace Treaty in 1951. A Japanese Mission was set up in Colombo in February 1952. In May 1953, Sri Lanka established a Legation in Tokyo

Sri Lanka was one of the nine Asian countries that participated in the San Francisco Conference on the Peace Treaty in 1951. The late former President (then Minister for Finance) J.R. Jayewardene attended the Conference and made a moving speech. He quoted from the words of the Lord Buddha, saying, “Hatred ceases not by hatred, but by love” and declared Ceylon’s disclaim of war reparations from Japan and requested other representatives to accept Japan as a member of the international community. The speech was said to have moved some of the victor countries, which demanded severe sanctions on Japan, and this is remembered as a symbolic event returning Japan to the international community later on.

President Mahinda Rajapaksa has made two visits to Japan – in December 2007 and March 2013. During those visits, the President called on Their Majesties the Emperor and Empress of Japan and held meetings with the prime ministers and other high-level government officials.

Speaking to reporters before leaving Tokyo, Abe called Bangladesh and Sri Lanka “countries with a growing influence in economic and political domains”.is scheduled to jointly launch the second stage of the second phase of the BIA development project today, thus marking another milestone in Sri Lanka’s journey towards achieving hub status in aviation in accordance with the Mahindana Chinthana-Vision for the Future.