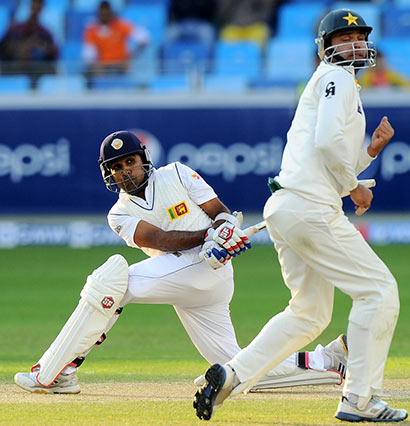 Mahela Jayawardene, batting with three stitches in his left hand, ignored the pain to complete his 32nd test hundred and put Sri Lanka firmly in the driving seat in the second test against Pakistan in Dubai on Thursday.

The stylish right-handed batsman, who was injured while fielding at slip on the opening day, punched the air in delight after reaching the century mark with a delicate late cut boundary off fast bowler Bilawal Bhatti.

Jayawardene had last scored a test hundred in April 2012 against England at home and had been dismissed cheaply by Bhatti in both innings of the drawn first test in Abu Dhabi.

He also added 139 with opener Kaushal Silva (95), who fell short of his maiden test hundred, for the fourth wicket after Pakistan had pegged back Sri Lanka with two early strikes in the morning.

The Pakistan bowlers toiled hard but failed to dislodge the pair as Sri Lanka remained unscathed in the afternoon session.

Part-time off-spinner Mohammad Hafeez finally broke the partnership when he dismissed Silva leg before after the batsman failed to connect with a sweep shot.

The diminutive right-hander trudged back to the dressing room after an unsuccessful attempt to review the umpire’s decision.

Jayawardene, on 26, successfully overturned an lbw decision off paceman Rahat Ali on review while wicketkeeper Sarfraz Ahmed dropped an edge from Mathews later off the same bowler to add to Pakistan’s frustration.

Rahat had struck early to send back Kumar Sangakkara (26) leg before while his fast bowling colleague Junaid Khan dismissed Dinesh Chandimal (12), batting at number four due to Jayawardene’s injury, to reduce Sri Lanka to 88 for three.