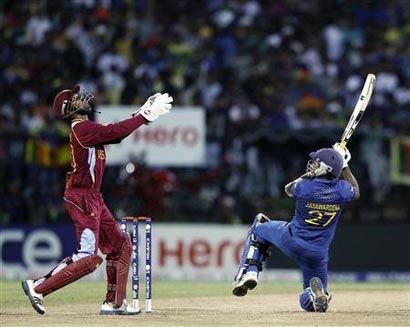 Jayawardene made little of the West Indies total of 129 for five, as he hit 10 fours and a six in his 49-ball innings which earned him the man-of-the-match award.

The Sri Lanka skipper and Kumar Sangakkara (39 not out), figured in an unbroken second-wicket stand of 108 off 75 balls to surpass the West Indies total with 28 balls to spare.

“We had a good game plan and we got it about 90 percent right,” said Jayawardene.

“All the bowlers bowled to our plans and we could put pressure on them.

“There was not much of a pressure for batsmen. We needed to play with wickets in hand.

“Dilshan gave us a good start and Kumar played well and we finished the game well,” he added.

West Indies struggled against spin and their total was never competitive enough to give their bowlers any chance against a strong Lankan batting line up on a slow turning pitch.

West Indies were restricted to 20 runs in the first six overs of power play, the lowest in the tournament so far.

However, the key wicket of Chris Gayle was picked up Nuwan Kulasekara who had him caught behind by Kumar Sangakkara for two chasing at a wide ball.

Marlon Samuels top scored for West Indies with 50 off 35 balls which included two sixes and four fours. He and Dwayne Bravo (40) added 65 for the third wicket off 56 balls.

“The pitch did suit Sri Lanka but we’re playing international cricket and when we’re in Sri Lanka we expect the pitches to turn. It’s nothing new to us. I just think we didn’t adapt quickly enough,” said Sammy.

“When we won the toss and batted first we backed ourselves to put a good total on the board but Sri Lanka bowled really well today and restricted us.”