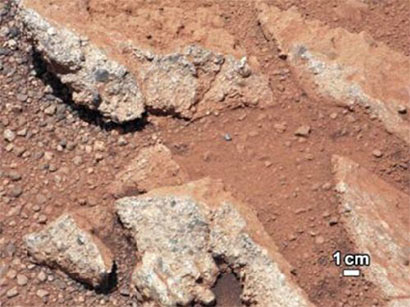 This image provided by NASA shows shows a Martian rock outcrop near the landing site of the rover Curiosity thought to be the site of an ancient streambed. (AP Photo)

CAPE CANAVERAL: NASA’s Mars rover, Curiosity, dispatched to learn if the most Earth-like planet in the solar system was suitable for microbial life, has found clear evidence its landing site was once awash in water, a key ingredient for life, scientists said on Thursday.

Curiosity, a roving chemistry laboratory the size of a small car, touched down on Aug. 6 inside a giant impact basin near the planet’s equator. The primary target for the two-year mission is a three-mile (five-km) -high mound of layered rock rising from the floor of Gale Crater.

Scientists suspect the mound, known as Mount Sharp, is the remains of sediment that once completely filled the crater. Analysis of a slab of rock located between the crater’s north rim and the base of Mount Sharp indicate a fast-moving stream of water once flowed there.

Images taken by Curiosity and released on Thursday show rounded stones cemented into the rock, which rises like a piece of jack-hammered sidewalk from the planet’s surface.

The stones inside the rock are too big to have been moved by wind, Curiosity scientist Rebecca Williams, with the Planetary Science Institute in Tucson, Arizona, told reporters on a conference call.

“The consensus of the science team is that these are water-transported gravel in a vigorous stream,” she said.

The rock is believed to be from the floor of an ancient stream which was once between ankle- and knee-deep.

The analysis is based on telephoto images taken by the rover, which is en route to a patch of land named Glenelg where three different types of rock intersect.

Scientists have not yet decided if the slab of rock warrants a chemical analysis, or if there are better targets for Curiosity to look for the building blocks of life and the minerals to preserve it.

“The question about habitability goes beyond the simple observation of water on Mars,” said lead scientist John Grotzinger at the California Institute of Technology.

“Certainly flowing water is a place where microorganisms could have lived. This particular kind of rock may or may not be a good place to preserve those components that we associate with a habitable environment,” he said.