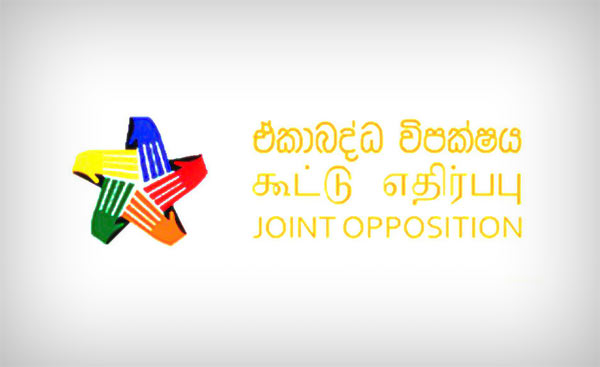 The Joint Opposition (JO) yesterday vowed to go ahead with its planned protest in Colombo today (Sept.5) in spite of IGP Pujitha Jayasundera’s warning the police would use ‘required force’ to maintain law and order.

The warning was issued on Monday September 03.

JO speakers alleged that the Police Chief had been working overtime to appease the top UNP leadership as he wanted to contest Kurunegala at the next parliamentary election.

Alahappeuma said that Jayasundera had warned the JO that his men would use ‘required force’ not ‘minimum force’ in the wake of arrest and remanding of former Minister Johnston Fernando, MP, and two others on Monday in connection with alleged misappropriation of Rs. 5.2 mn during the previous administration.

Alleging that the IGP had become part of the UNP apparatus, Alahapperuma urged the police not to carry out illegal orders given by the IGP under any circumstances.

The JO alleged that the IGP was likely to take action at the behest of his political masters. Alahapperuma, at the onset of his brief comments said that a police officer of the State Intelligence Services was among the journalists at the media briefing. A smiling MP said that the officer could brief those at Temple Trees and the Janadhipathi Mandiraya as regards the JO’s plans.

Alahapperuma said that the police were powerless to block the Colombo protest. The MP called Jayasundera the worst IGP Sri Lanka ever had.

Asked by The Island whether the JO parliamentary group would complain to the National Police Commission (NPC) regarding Jayasundera’s conduct ahead of the protest, Gammanpila said that there was absolutely no point in seeking the NPC’s intervention. Gammanpila pointed out that the IGP had routinely ignored instructions issued by the NPC therefore the police and the independent commission should resolve whatever issues between them.

Gammanpila said that the JO didn’t want to waste its precious time with the NPC knowing it wouldn’t do anything.

Gammanpila said that the government was likely to stage some incidents at selected points as part of its overall strategy to sabotage the protest. Gammanpila urged JO activists to use their smart phones to capture incidents to prevent the government from exploiting the situation.

Alahapperuma said that Wednesday protest would be the largest ever held in Colombo.

Alahapperuma said that on behalf of the JO he profusely apologized for inconvenience caused to the public due to the protest. However, the JO had no option but to go ahead with it to attract public attention. Alahapperuma urged the public to bear the difficulties for the greater good of the country.

He requested the media, too, to join the campaign in addition to performing their traditional task.

Jayantha Samaraweera warned law enforcement officers loyal to Jayasundera n not to interfere with the public right to protest in any part of the country.

Raja Collure said that the government and the police Chief wouldn’t have reacted this way with the latter threatening to use ‘required force’ if it was confident of dealing with the situation. The Sirisena-Wickremesinghe government knew it was extremely unpopular with the masses.