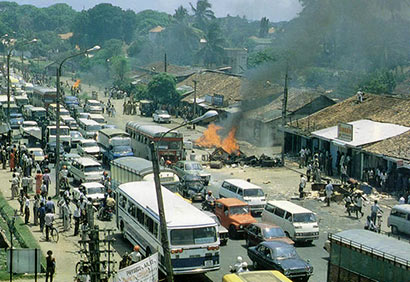 For thirty one years there has been little or no mention and complete silence in acknowledging the fact that scores of Sinhalese braved death to protect and give safe haven to their Tamil neighbors. This all important piece of information has been purposely left out of every commemoration event held as Black July. The silence or neglect of acknowledging the role of the Sinhalese in giving refuge to Tamils in their own homes, feeding, clothing and providing shelter has gone unrecognized and completely shunned by media and the analysts and commentators coming forward yearly to describe the events of 1983 July. It is no better a time than now to give credit where credit is due and finally appreciate the magnanimity and compassion of the Sinhalese who opened their homes to Tamils even those they did not know.

There are many other factors that have been purposely left out or omitted from discussion.

Other myths and inaccurate references:

There is no need for the Sinhalese people to apologize for 1983. If at all any apology is due it is from the UNP Government. The people had nothing to do with the riots and those that eventually took part were ruffians belonging to all castes, creeds and religions for they had a field day looting businesses and homes.

Now into the 31st year since 1983 it would be nice if the Tamils came out with a public acknowledgement that 83 was not the fault of the Sinhalese (in particular the Buddhists) and also publicly acknowledge that the Sinhalese sheltered and looked after the Tamils and even their belongings. That gratitude and thank you has yet to be forthcoming and instead large sums of money is spent on funding commemorations aimed at demonizing the Sinhalese.