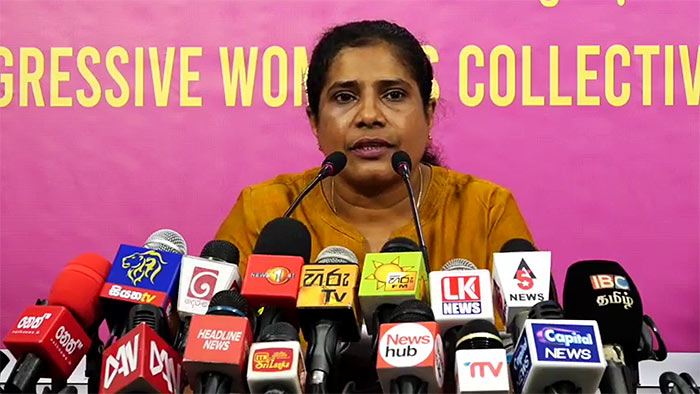 Sri Lankan migrant workers knew that President Gotabaya Rajapaksa had two characters and he had a peaceful side and a dark side since he treated the migrant workers and Ukrainian tourists in two different ways, member of the JVP-led NPP member of the Dehiwala-Mount Lavinia Municipal Council Samanmalee Gunasinghe said yesterday.

Addressing the media at the JVP headquarters in Pelawatte, Gunasinghe said that the tourism industry contributed only around four billion rupees to the national economy while the migrant workers’ contribution was at seven billion rupees a year.

“The government overlooked bringing home the stranded Lankan migrant workers but rolled out the red carpet to Ukrainian tourists. There were COVID-19 infections among those tourists and that finally resulted in some Lankan hotel employees and drivers getting infected by the virus. The President welcomed the Lankan migrant workers who came down in planeloads to vote for his party.

Gunasinghe said adding that the Ukrainian tourists were given princely treatment while the government had allowed its friendly businessmen to exploit the Sri Lankan migrant workers who are brought home.

JVP-led NPP MP Dr Harini Amarasuriya said the repatriation of Sri Lankan migrant workers had become a big business for a handful of tycoons. “We are happy that many leading government members in and out of parliament last week said they too felt something suspicious about this process. Around 300 Lankan citizens died abroad because of the pandemic. The issue of stranded Lankan migrant workers is not a problem that came up last week. It started around 10 months back but its was only last week that the government expressed its willingness to bring them home. Now, the government says that only those who have registered themselves with the Foreign Employment Bureau would be brought home, but when they sent seven billion rupees home the government did not ask whether they were registered or not. Every person has a right to return to his or her home country. It is a universally-accepted human right. It is unfortunate that the government has no regard for that.”

Progressive Women’s Collective Chairperson, Saroja Savithri Paulraj said: “The government should take responsibility for every single Lanka migrant worker who died abroad because it failed to help those workers come home owing to the pandemic. Every other nation in the world has brought its citizens home.