JVP inspires calls for protests against rising cost of living 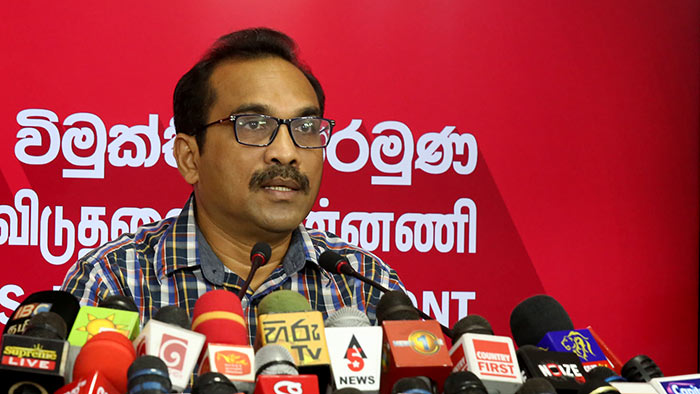 The JVP yesterday called on people to take to the streets against the government that cannot control market prices of essential items.

Addressing a press conference held at the party headquarters in Pelawatte, the party’s national organiser and former MP Bimal Rathnayake said that yesterday’s fuel price hike was unjust and it would result in further increases in prices of all goods and services in the coming days, sending the pandemic-hit economy from the frying pan into the fire.

“This is the highest ever price hike in fuel in the country’s history. As per an announcement by the Ceylon Petroleum Corporation Octane 92 petrol price has been increased by Rs 20, Octane 95 by Rs 23, diesel by Rs 10, Super diesel by Rs15 and kerosene by Rs 10. The reason for the price revision has been attributed to the world market price change of fuel. It cannot be accepted. There had been many previous occasions when the world market price of fuel increased more than this. In 2013 the price of a barrel of oil was at USD 97. For years the price was at USD 100 a barrel. There had been some increase in price in the world market but following the spread of the Omicron variant there were travel limitations in Europe and price of fuel decreased. There is a presumption that the price of an oil barrel would be around USD 60 owing to the Omicron effect.  Then the truth is that the government jacked up fuel prices at a time when the world market prices are going down.

“The CPC and Petroleum minister have become puppets of the ruling cabal. Discussion for fuel price increase started by the government on Dec 13 soon after the budget. Yet Finance Minister Basil Rajapaksa did not allow the prices to increase while he was still in the country. He wanted to show that the price increases took place in his absence. His intention was to apportion the blame on the petroleum minister and the acting finance minister. Yet the truth has come out and now it is a known fact that the CPC increased the prices last night on a directive from the Finance Ministry.  It is clear that the finance minister plotted to place the blame on others. This is a well-known tactic of Rajapaksa family. The rest of the ministers are used by them as puppets.

“Bakery owners are planning to increase the prices of their products. Three wheel operators say that they would increase their starting price per km from Rs 30 to Rs 80. Bus owners demand to increase the minimum fee to Rs 25. Likewise, the prices of various services and goods would go up in the coming days. The government has lost control of prices and the market. There are shortages of various items. The standards of available consumables are questionable. Traders fleece consumers at will. While the government is fleecing people it has let several big-time companies fleece money from the people. People can identify those companies because it was they who recorded unprecedented profits in the third quarter of this year. Some banks recorded 312 percent profit in the said period. There are two main companies running supermarket chains. One says it received a Rs 3,500 million profit after tax and the other has raked in Rs 1,387 million profit in the third quarter. These profits came at a time when the economy was down. They have earned profits by increasing the prices at their will. Rice prices in the market are decided by the millers. The government has lost control of the prices in the market. We call on people to raise their voice and stand with us against this government”, Rathnayake said.