JVP on plight of worst affected lost in macro picture 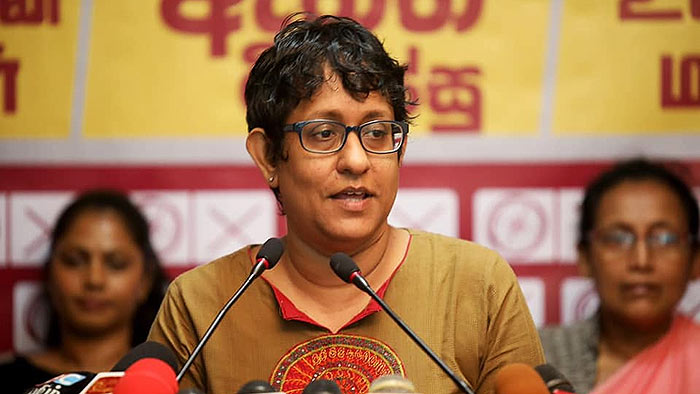 Communities worst affected by Covid-19 and its consequences were the most marginalised and most vulnerable sections in the society, JVP led NPP MP Dr Harini Amarasuriya told Parliament.

Participating in a debate on the Nation Building Tax (Amendment) bill on Wednesday, Dr Amarasuriya said that 64 Lankan migrant workers had died abroad from Covid-19 and it was larger than the number of deaths in Sri Lanka. “The country successfully dealt with the first wave of the virus. And yes, we acknowledge the role played by the government in the battle.

But, it was not just the government that achieved that goal. We also have to acknowledge the role of the health sector and the people of this country who followed the health regulations.”

Not all of us have the luxury of working from home and not all of us have the ability to use private transport to move around and do our grocery shopping online. Most of the people of this country have to deal with the consequences of this virus and of the measures taken in ways very different to the few of us.”

She said that the issue here was that when they talked about the financial regulations and policies, their focus was on the economic growth. “Although we argue across this isle we often fail to think who actually benefits from these measures and whose lives have improved. If we really look at some of these measures or consequences of some of these economic decisions that have been reached in this chamber, we can clearly see that not everyone has benefited equally. If we look at these conventional indicators used to measure economic success, or economic prosperity, and if we replace some of these indicators looking at the wellbeing and happiness of the people of this country, we will have to acknowledge that over the last several decades, the lives of the majority of the people of this country have in fact become more insecure, more uncertain and more precarious.”

She said that it was unfortunate that the worst affected by the second wave of the COVID-19 pandemic in the country were women employed in the most exploited sector in the country. “One employer, one factory or one person cannot be held responsible for this. What these figures reveal to us is that our systems and our structures have failed and unless we address the systemic failures, we will be continuing to reinforce the vulnerabilities of one of the most marginalised groups in our society,” she said.