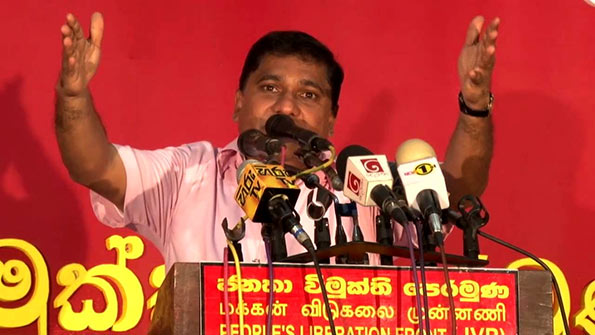 President Maithripala Sirisena’s claim that he was opposed to giving nominations to former President Mahinda Rajapaksa to contest upcoming polls is not acceptable, the JVP says.

JVP propaganda Secretary former MP Vijitha Herath addressing a public rally at Yakkala, Gampaha said yesterday (15): “After everything has happened the President appears on TV claiming he did not want to give nominations to Rajapaksa. We are sure the people of this country will not accept what he says ever again. He has made a bad mistake. It is too late for him to correct what he did.”

Herath said that UPFA had rejected giving nominations to former MP Sarana Gunawardena from Gampaha but instead approved the nominations for Gunawardena’s wife. “The UPFA has rejected the husband and given nominations to the wife. Their move is to cheat people. The UPFA promised not to give nominations to ethanol businessmen, heroin dealers, fraudsters and casino owners. But take a look at their list. It is full of all sorts of thieves in their hundreds,” Herath added.