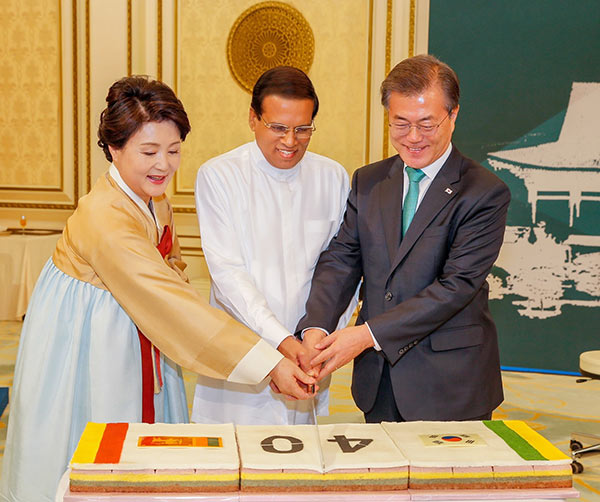 Korea has increased bilateral concessional loans for Sri Lanka, from US$ 300 million to US$ 500 million, as the two countries celebrate 40 years of diplomatic relations.

Extension of the Framework Agreement (FA) for Official Development Assistance (ODA) from the Economic Development Cooperation Fund (EDCF) entrusted with Korea Eximbank , was signed in the presence of President Maithripala Sirisena,in Seoul on Thursday.

Korean diplomatic sources said that the FA would enable the Sri Lankan government to obtain bilateral concessional loans up to U$ 500 million as a means of ODA from the EDCF. ” We have offered favourable terms by fixing interest rates at between 0.0 percent and 0.15 percent for infrastructure development,with repayment due over forty 40 years, plus a grace period of ten years.”

Priority would be given to education, transportation, water and sanitation and rural development projects, in keeping with the Sirisena-Wickremesinghe governments “Vision 2025: A Country Enriched”, aimed at reaching upper middle income country status , the sources added.

A Memorandum of Understanding between the Investment Boards of both countries, was among the other agreements inked.

President Sirisena who was on an official visit to Korea, also participated in a Business Forum at the Grand Hyatt in Seoul, attended by over100 delegates representing both Korea and other East Asian countries and twenty leading Sri Lankan businessman.

The Korean entrepreneurs who took part in the Forum included Chairpersons of KBIZ, KCCI, KITA, FKI and AHPEK.

Chairman KBIZ, Park Sung-taek spoke about the successful investments by his company in Sri Lanka and urged his fellow businessman to grasp the opportunities that were available.

Minister of Development Strategies and International Trade, Malik Samarawickrema told the Business Forum , that Sri Lanka welcomed investments in power and energy, natural gas, roads and ports, agriculture, fisheries and large scale industries among others. He said that generous tax concessions and other benefits that Foreign Direct Investments were entitled to, would be provided.

The visit took place at a time the two countries are celebrating the 40th Anniversary of the establishment of diplomatic relations.

(Source: The Island – by Zacki Jabbar / Pix by President’s Media)