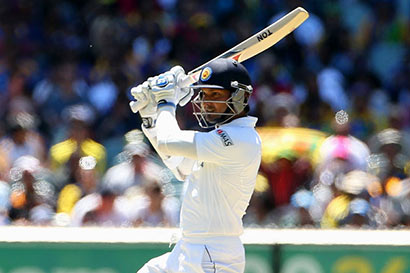 Sri Lanka batsman Kumar Sangakkara has become the fastest player to reach 12,000 runs in Test cricket – and only the fifth to reach the landmark.

The 37-year-old achieved the feat in his 224th Test innings, during his side’s second Test in New Zealand.

Sangakkara’s 33 not out helped his side to 78-5 after the Kiwis were all out for 221 on day one in Wellington.

New Zealand lead the series 1-0 after an eight-wicket win in Christchurch.

Sangakkara began his innings on 11,995 runs and was given a standing ovation when he became the first Sri Lankan to reach 12,000 by knocking Trent Boult square for two.