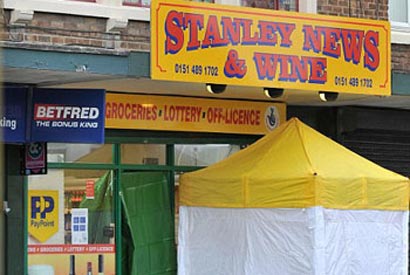 A forensic tent outside Stanley News and Wines on Kingsway, Huyton, Liverpool, where a shop worker was stabbed to death

UK Police hunting the killer of a Sri Lankan shopkeeper, who was stabbed to death as he worked, are scouring CCTV footage. The 30-year-old victim, who has not yet been named, was knifed in the neck during the attack at the Liverpool shop at around 9pm on Tuesday night.

He was found collapsed inside Stanley News and Wines on Kingsway, Huyton, and died at Whiston Hospital a short time later.

Merseyside Police said the motive for the murder remains unclear and they are keeping an open mind.

Detectives are now studying CCTV footage which shows the attacker, whose face was covered, running out of the shop and away from the scene.

The victim had been living in the UK for around 12 months and efforts are now taking place to trace his family in Sri Lanka. Police said he was an employee at the shop, a general store and off license, which is owned and managed by a Sri Lankan family.

He said: “At approximately 9.05pm last night we received a call to a newsagents on Kingsway in Huyton.

“There we found a 30-year-old man had sustained serious injury consistent with a stab wound to the upper body.

“He sustained a horrific injury which sadly led to his loss of life.”

Mr Martland added: “We don’t know what the motive for the attack was, all we can say is that it was unprovoked and we have no idea why this individual was targeted.”

He said there was no indication of a robbery and the murder was not being treated as a racially motivated attack.

The killer was described as a stocky male who was wearing a dark tracksuit and had concealed his identity by covering his face.

A post-mortem examination on the victim is due to take place later.

The scene remains cordoned off for forensic examination and police officers are carrying out house-to-house enquiries and high visibility patrols, UK Mirror reports.

1 Response to Lankan shopkeeper knifed to death in Liverpool