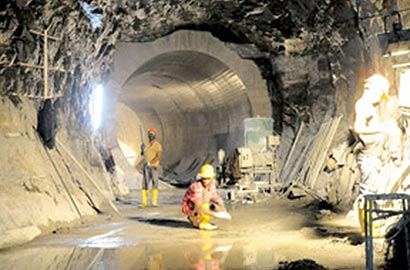 The ceremonial release of water into the tunnel of the Upper Kotmale hydro electricity project took place at the auspicious time of 11.20 am yesterday under the patronage of Power and Energy Minister Patali Champika Ranawaka.

Water for the Upper Kotmale project is supplied from the Kotmale Oya through a 13 km long tunnel with a 5.9 metre diameter from Talawakelle to Niyamgamdora by opening its main gate upto 10 centimetres and three cubic metres of water is carried per second through the tunnel.

A press release by the Power and Energy Ministry said engineers have planned to commence electricity generation on an experimental basis at Upper Kotmale by the end of this month.

The planned capacity of Upper Kotmale project is 150 megawatts and it will be connected to the national grid at a ceremony presided by President Mahinda Rajapaksa on March 27. With the connection of the Upper Kotmale project to the national grid the country’s total hydro electricity generation capacity which was 1,207.45 megawatts earlier will be increased to 1,357.45 megawatts. Yesterday’s ceremony was also attended by Deputy Minister Premalal Jayasekara, CEB chairman Prof. Wimaladharma Abeywickrama, General Manager Nihal Wickramasuriya, Additional GM and Upper Kotmale Project Director Shavindranath Fernando.