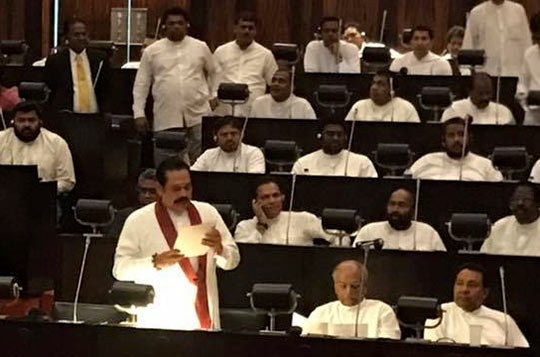 Prime Minister’s office has released full text of the speech made by the Hon. Prime Minister Mahinda Rajapaksa in Parliament on Thursday the 15th  November 2018.

The President has explained why he dismissed the previous government and appointed an interim government until the conclusion of the next general election. By the 26th of October, the people of this country were living under enormous pressure. The cost of living was increasing on a daily basis due to the fuel pricing formula and the rapid depreciation of the Rupee. The unprecedented tax burden, the doubling of interest rates as a result of the Central Bank bond scam,  the preparations being made to sell off harbour terminals, airports and profitable government ventures to foreign parties, the laws being drafted to enable foreigners to purchase freehold land in Sri Lanka, the signing of free trade agreements against the advice of professionals and local businessmen, the soliciting of bribes from potential investors were all weighing down on the people and there was a great deal of popular resentment against the previous government on that account.

We saw the President making some effort to mitigate the damage that was being done to the country by taking steps such as dismissing the UNP’s economic affairs committee. We heard that there had been sharp exchanges between the President and the Prime Minister in cabinet over these issues. It was at this stage that the media began to broadcast voice recordings relating to a conspiracy by persons associated with the UNP to assassinate the president and the former Defence Secretary with the involvement of certain elements in the police. It was only after things reached such a pass that the President decided to take the UPFA out of the coalition government. The withdrawal of the UPFA led to the dissolution of that government and the President under the powers vested in him by the Constitution, invited me to accept the Premiership and form a government.

I had the choice of either accepting that invitation or declining it. I could have simply said that it was best to allow the UNP government to continue in office for the remaining one year or so.  However, we were the main opposition force in the country. We are the largest political party in the country. When the President hands the country over to us in order to prevent a major catastrophe from taking place, it is our duty to accept that responsibility. I accepted the responsibility of running the country on that basis. Another matter that I had to take into consideration was what would have happened to the country if the UNP had continued in power for another year. Since January 2015, that government had borrowed more than USD 21 Billion in foreign currency loans.

This reckless borrowing spree was by far the most serious damage that was being done to the country. What we formed was only an interim government until a general election is held. That was why only a handful of Joint Opposition members accepted portfolios in the new government. As the situation in the country deteriorated, the Joint Opposition had been consistently calling for Parliament to be dissolved and fresh elections held.

However the previous government had literally ‘rolled up the electoral map’. It took nearly three years for elections to be held for the local government institutions that had been dissolved in March 2015. They postponed elections on the pretext of issues pertaining to the delimitation of wards. When that government filed action in court and attempted to put off local government elections indefinitely, the Chairman of the Elections Commission announced that they would hold elections to the local government bodies that did not have any delimitation issues. It was only then that the government finally agreed to hold that long delayed election. For more than one year, there have been no functioning Provincial Councils in the Sabaragamuwa, North Central and Eastern provinces. Last month, three more provincial councils including the Northern PC stood dissolved. But there have been no elections.

When the President dissolved Parliament and called a general election, for the first time in the history of this country, the UNP and the JVP have petitioned courts against the holding of a general election. These are the same parties that shamelessly perverted the entire law making process by bringing in committee stage amendments to change the entire system of elections to the local government institutions and Provincial Councils to Bills that had been introduced in parliament for completely different purposes in order to postpone elections to those bodies. The same parties that have gone to courts against holding an election, deprived the people of the right to vote at that time as well.

The Parliaments of 1947, 1951, 1956, and 1960 were all dissolved early to enable the people to exercise their franchise and elect a government of their choice. That was how the people’s sovereignty was safeguarded at that time. It was because the President realised that the previous government was not able to solve the problems of the country that he invited me to form a new government. There was wave of relief throughout the entire country when I was sworn in as Prime Minister.

Our Speaker who acts hand in glove with certain Western embassies and his political party has in violation of the provisions in the Constitution and the Standing Orders of Parliament, announced that a no confidence motion has been passed against me in Parliament by a voice vote. Everyone saw that a proper vote was never taken in Parliament. After the Speaker announced the purported result of a no-confidence motion, former Ministers of the previous government had gone to their previous ministries claiming that Mr Ranil Wickremasinghe was now once again the Prime Minister. Only the President can appoint a Prime Minister and a Cabinet. The Speaker and Parliament have no role in making such appointments.

However, there is now a dispute in Parliament. I suggest that we take this matter before the 15 million plus voters in the country instead of trying to resolve this among the 225 persons sitting in this House. That is the parliamentary tradition. We politicians must realize that according to our Constitution, sovereignty resides in the people not in Parliament. I was pleased to hear the JVP stating at a press conference yesterday that if someone brings a resolution to dissolve Parliament and hold a general election, they would support that motion. I expect the UNP to make their stand on this matter known today on the floor of this house. I invite all 225 Members of this House to join me in paving the way for the sovereign people to decide.