“Let Us Work Together to Overcome Obstacles” – President Tells Namibia 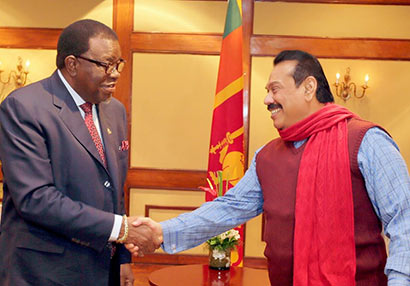 “We must work together to overcome obstacles including unjustified external forces,” President Mahinda Rajapaksa told the Namibian Prime Minister Hage Geingob. “The situations of the countries which were subjected to foreign interferences are worse today than before. Those countries are more chaotic, and it is the only thing that had happened.”

President Rajapaksa, apprising the Namibian Prime Minister of the progress achieved by Sri Lanka following the end of the conflict, pointed out that the country has done much work in the areas of resettling internally displaced persons, rehabilitating and reintegrating ex-combatants, releasing ex-child soldiers and developing infrastructure within a short span of time.

“We were able to hold provincial council elections in the North,” the President said. “We have appointed commissions for national reconciliation. One is the Lessons Learnt and Reconciliation Commission and the other one is the Presidential Commission to Investigate Complaints Regarding Missing Persons. People live in peace. The only ones who are unhappy are the politicians and forces against the
country.”

The Namibian Prime Minister, explaining the similar situation his country is faced with, expressed his gratitude to President Rajapaksa for Sri Lanka’s assistance extended towards Namibia.