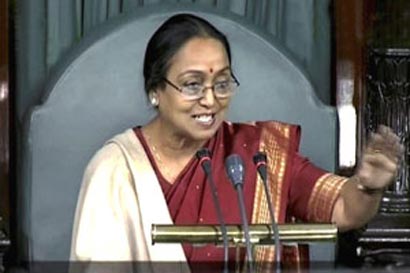 “She expressed anguish and offered sincere apologies over slogan shouting by some Members of Parliament in the House when the visiting delegation were witnessing the proceedings of the Lok Sabha,” a Lok Sabha Secretariat release said.

AIADMK members in the Lok Sabha Monday shouted slogans to protest the presence of Sri Lankan delegates, led by Speaker Chamal Rajapaksa, who were in the house as special foreign guests.

A visibly irate Meira Kumar rebuked the Tamil MPs and asked them to show some courtesy to the honoured guests, the Indian media reported.

Later in the day the Sri Lankan delegation led by the Speaker Rajapaksa called on the Indian Speaker in New Delhi.

During the interaction, the Indian Speaker said the visit of the Sri Lankan Parliamentary delegation would create new avenues of cooperation between the two countries.

Observing that parliamentary exchanges play an important role in strengthening bilateral relationship, she emphasised on greater engagement between the two Parliaments.

She hoped that there would be comprehensive engagement between India and Sri Lanka to ameliorate the social and economic profile of the people and to find a dignified solution to the problems of the internally displaced persons of Sri Lanka.

Speaker Rajapaksa, responding to the sentiments expressed by the Lok Sabha Speaker, felt that India and Sri Lanka share many cultural and social commonalities and that both the countries should make sincere efforts in facilitating enhanced cooperation in areas of mutual interest, the PTI said.

The Sri Lankan delegation is on a five-day official visit to India on an invitation by the speaker.