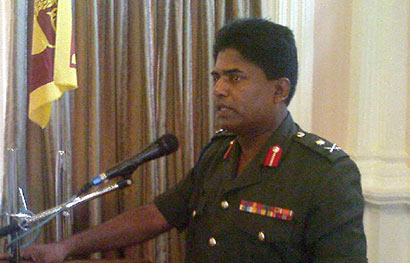 After receiving commission as a 2/ Lieutenant he was posted to the Sri Lanka Army Signals Corp. A product of Ananda College, Colombo he was a good sportsman and also excelled in academic activities as well. During the tenure in the Army he had completed the Master of Science in Management degree at the Sir John Kotelawala Defence University and did the staff course at the Command and Staff College, Bangaladesh.

In his long and illustrious military career that spans over 33 years Maj Gen Samarasinghe has held a number of operational and staff appointments. The one time military spokesman had actively involved in major operations during the humanitarian operations.

He had also served as the Defence Advisor (Minister Counselor) at the Sri Lankan High Commission in the UK. He also held the title of Director General of the Centre for Research and Development under the Ministry of Defence and Urban Development and Regimental Commander of the Military Intelligence Corps (MIC) of the Sri Lanka Army. He was also the Commandant of the Sri Lanka Army Volunteer Force