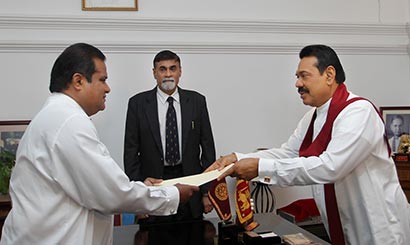 Sri Lanka Freedom Party’s Najeeb Abdul Majeed was sworn in as the new Chief Minister of the Eastern Province Council before President Mahinda Rajapaksa, this morning on 18 September.

There was uncertainty over the formation of the governing council of the multi-ethnic Eastern Province since the election was held on 08 September. No party was able to command absolute majority in the 37-member council. Therefore the ongoing political uncertainty in Eastern Province ended this morning with the appointment of ruling UPFA coalition’s Najeeb Abdul Majeed as the Chief Minister at Temple Trees.

Meanwhile former Chief Minister and the leader of the Tamil Makkal Viduthalai Puligal (TMVP), Sivanesathurai Chandrakanthan alias Pillaiyan has been appointed as a Presidential Advisor. Chandrakanthan, a Tamilian who held the Eastern Chief Minister’s position was replaced by a Muslim today.

A decision to form the government led coalition was made by a high level ministerial committee appointed by President Rajapaksa to determine the choice of a new Eastern Provincial Chief Minister and composition of the provincial ministerial board. The four member team of cabinet ministers entrusted with the task of finalizing arrangements for the Eastern province was Economic Development Minister Basil Rajapaksa, Environment Minister Anura Priyadarshana Yapa, Petroleum Industries Minister Susil Premajayantha and Youth Affairs and Skills Development Minister Dullas Alahapperuma.

Finally, SLFP’s solitary Muslim provincial councillor Najeeb Abdul Majeed elected on the United Peoples Freedom Alliance (UPFA) ticket from Trincomalee district was chosen and he is the first Muslim Chief Minister of the Eastern Province. Furthermore United People Freedom Alliance decided to grant two ministries for SLMC which supports the UPFA to hold governance in the province. SLMC Ampara district candidates M.Mansoor, A.M.Jameel and the Batticaloa district member Habiz Nazeer Ahamad would be the front runners for those ministry positions.

Former Eastern Chief Minister Sivanesathurai Chandrakanthan and the Wimalaweera Dissanayake would be appointed as provincial ministers too. The National Congress and All Ceylon Muslim Congress led by Cabinet Ministers A.H.M Athaullah and Rishaad Badiutheen will not be given any ministerial posts. Instead the Provincial Council Chairman and Deputy Chairman posts will be given to them.

The Tamil National Alliance (TNA) and UNP also engaged in a hectic effort to obtain the support of the SLMC to establish the Eastern Provincial Council. The Eastern Province which is multi-ethnic consists of almost equal number of population representing Sinhalese, Tamils and Muslims.

The Presidential Office sources informed that the swearing in of the Chief Ministers of the other two provincial councils, Sabaragamuwa and North Central will be held soon before the President’s departure to India. 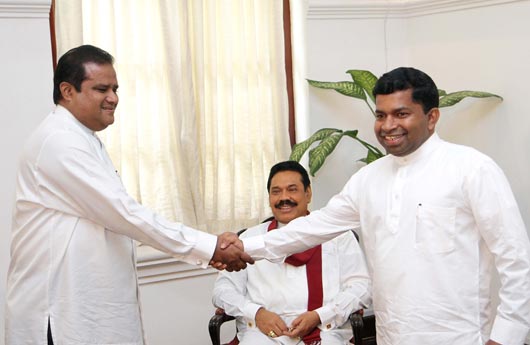 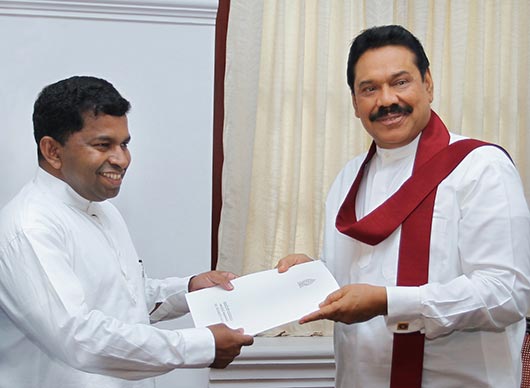