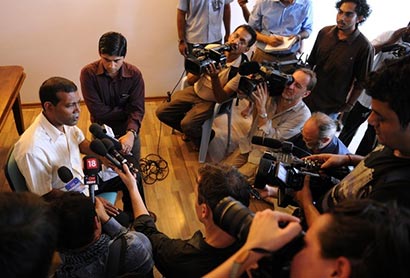 MALE (Reuters) – The former president of the Maldives, Mohamed Nasheed, demanded on Friday fresh elections and said he would organise street protests in the Indian Ocean archipelago best known as a luxury beach getaway if polls were not called.

Nasheed was free despite an arrest warrant against him as diplomats including a U.N. envoy worked to forestall renewed violence after his removal this week, which he said happened at gunpoint in circumstances he described as a coup.

“Fresh elections are our bottom line and we are not relying on the international community for that, we are relying on the people of the Maldives,” Nasheed told reporters.

“In absence of (elections) we would have to go out on the streets.”

Rain and cooler weather appeared to ease tension a day after the new government issued a warrant against Nasheed, who quickly returned to his roots as a street activist and dared police to arrest him.

But Nasheed said police and military were ransacking Addu atoll, a bastion of his supporters, and were dragging people out of their homes and beating those who belonged to his party.

“We are losing a country as we speak.” Earlier, Nasheed, speaking to Reuters in front of his family home in central Male, capital of the 1,200-island archipelago of 330,000 Sunni Muslims, said there had been no clarification on the status of his arrest warrant.

Security forces, a group of whom Nasheed accused of conspiring with political rivals to usurp him under the guise of a constitutional handover to his vice president, took no chances during Friday prayers.

About 50 troops and police wearing helmets and riot gear stood guard in Republic Square, site of the Grand Mosque and two days of violence that first saw Nasheed unseated and then roughed up along with supporters as they protested his ouster.

Fernandez-Taranco was among several teams of diplomats, including ones from India, Britain, the United States and European Union, who were either in Male or soon to arrive. A Commonwealth delegation was meeting all political parties.

“We told the president that at this time, it is very important to ensure the police and military operate on an entirely constitutional level to cool the temperatures,” Akbar Khan, the Commonwealth delegation head, told Reuters.

“The fragility of the democratic transition here was clearly demonstrated by recent events.”

The Maldives, for almost nine centuries a sultanate before it became a British protectorate, held its first fully democratic elections in 2008. Nasheed defeated Maumoon Abdul Gayoom, who at 30 years in power was then Asia’s longest-serving leader and accused of running the country as a dictator.

An Indian government official said Indian ships were close by and monitoring the situation and could help with the evacuation of tourists if the situation worsened.

India saw the events in the Maldives as its internal affair but had sent a special envoy, the official said, adding that India hoped elections would be held at the earliest date to the satisfaction of all political parties.

Nasheed, writing in the New York Times, said what had happened in the Maldives since the downfall of “iron-fisted” Gayoom should serve as a warning “for other Muslim nations undergoing democratic reform.”

“The dictator can be removed in a day, but it can take years to stamp out the lingering remnants of his dictatorship.”

On Addu atoll, the second-largest population centre in the Maldives with 30,000 people, Nasheed’s supporters went on the rampage on Wednesday, attacking and razing police stations, courts and government buildings.

“Everyone is now silent, but I don’t know if there will be more problems,” firefighter Hussain Sharif told Reuters by telephone from Addu’s Gan island, a former British air base.

But he said police were arresting councilors from Nasheed’s party, accused of fomenting the vandalism, but said the explosion of outrage was due to a false report.

“The violence began the other day because someone gave the news that Mohamed Nasheed was dead, or was going to be killed by the police or military,” Sharif said. “Now that news is wrong.”