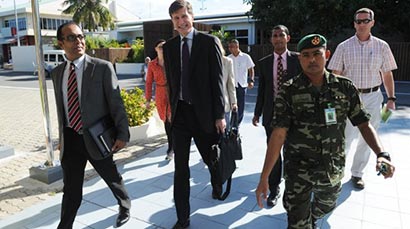 Male:  A top U.S. government official met with leaders in the Maldives on Saturday to get a fresh assessment of the political situation in the Indian Ocean nation.

Blake also was expected to meet with former President Mohamed Nasheed and other leaders of the island republic. Nasheed claims he was ousted in a coup earlier this week, and there is an arrest warrant against him.

The new government denies the coup claims and insists Nasheed stepped down voluntarily. It has made no move to arrest Nasheed, who is living openly in his home in Male, the capital.

Hassan has announced his intention to form a coalition to help restore stability ahead of fresh presidential elections due next year.

However, Nasheed is calling for early elections, insisting his party would emerge victorious.
The United States initially recognised the new Maldives government on Friday. It later backtracked, saying the situation was unclear.

Male remained peaceful on Saturday. There were no signs of extra security on the streets and people went about their normal lives.

Tourism is the main industry in the Maldives, a chain of nearly 1,200 islands off southern India blessed with sandy beaches and coral.

1 Response to US government official meets with new Maldives leader