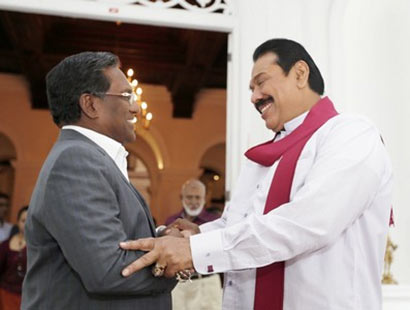 The President of Maldives, Dr. Mohamed Waheed accompanied by First Lady Ilham Hussain and a business delegation arrived in Sri Lanka on a two-day working visit.

The meeting between President Rajapaksa and President Waheed focused on further strengthening bilateral relations between the two island nations.

Maldivian President, during his second official visit to the island, will also meet with several members of Sri Lanka’s business sector and the Maldivian community in Sri Lanka.

President Waheed has told Maldivian Media ahead of the visit that on his second visit to Sri Lanka since coming to office controversially last year, he would be holding bilateral talks on various issues such as requesting supply of materials like construction gravel and amendments to current visa arrangements between the two countries..

President Waheed iwill brief the diplomatic community in Colombo about the latest developments in the Maldives.