Maldivian President Yameen to President Rajapaksa: “We Will Support You” 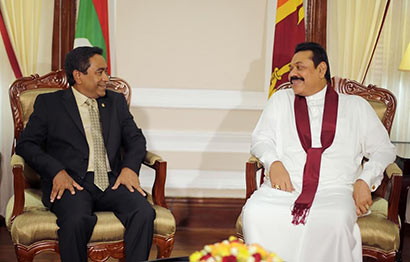 President Mahinda Rajapaksa welcomed Maldivian President Abdulla Yameen Abdul Gayoom and his delegation this morning to the Presidential Secretariat in Colombo where bilateral talks took place. Following a one-on-one conversation between the two leaders, the delegations of the two countries partook in bilateral discussions spanning a wide variety of sectors.

At the outset, President Rajapaksa commended President Yameen’s government on the recent election victory last November and for the peaceful political transformation that took place in the island nation.

“I am confident that under your able guidance, the Maldivian people would prosper and the country would reach its full economic potential,” President Rajapaksa said. “As the only two island nations in South Asia, we share many values and cultural traditions.”

The President further added that visits between officials at the highest political levels serve to further strengthen the “bonds of friendship between our two countries.”

Speaking about the historical ties between Sri Lanka and Maldives, President Yameen, who is on a state visit to Sri Lanka, pointed out that to many Maldivians, Sri Lanka is often like a second home. Currently, there are more than 9,000 Maldivians living in Sri Lanka.

“Sri Lanka has always been a brother and ally,” President Yameen said. “We are very grateful for the invaluable friendship.”

President Rajapaksa thanked Maldives for its continuous support to Sri Lanka at international fora to which President Yameen quickly replied, “What are neighbors for, if we can’t support each other in times of need. We will support you.”

Citing economic development, and the peace and stability currently prevailing in Sri Lanka, President Yameen said, “We marvel the remarkable achievement the Sri Lankan people are enjoying. What is good in Maldives will transfer to Sri Lanka. Peace and prosperity in Sri Lanka will benefit Maldives.”

During the bilateral discussions, the two delegations discussed a number of sectors relevant to both countries in addition to generally strengthening overall bilateral ties in the areas of health, tourism, air services, immigration and security.

President Yameen requested Sri Lanka to help enhance health and education facilities for the Maldivian population currently in Sri Lanka, stressing that Sri Lanka is popular among Maldivian students for pursuing higher education and is often the first choice for obtaining healthcare services.

The fishing sector was also discussed at length. Sri Lanka requested Maldives to grant permission for “innocent passage” for Sri Lankan fishermen sailing to the Arabian Sea. Fishermen would not engage in any fishing in Maldivian waters, but would, according to international laws of the sea, be able to sail in transit. Sri Lanka requested Maldives to also consider purchasing boats manufactured in Sri Lanka, noting that Sri Lankan manufacturers have already received recognition from countries such as Seychelles for producing high-quality vessels.

Following the bilateral talks, Sri Lanka and the Maldives signed the following agreements to further cooperation between the two nations:

The primary Sri Lankan delegation consisted of the following

A number of other secretaries of ministries and government officials were also present at the bilateral talks. 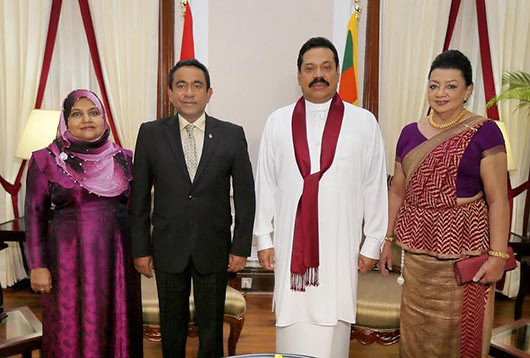 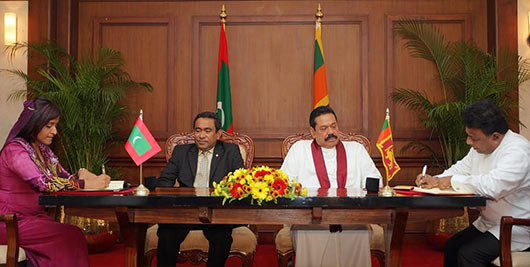 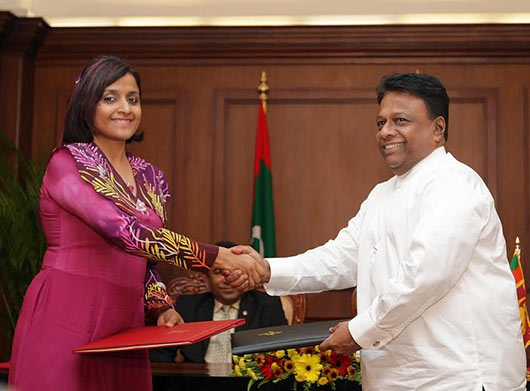 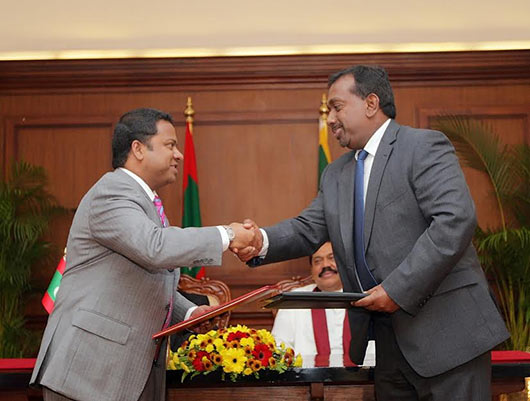 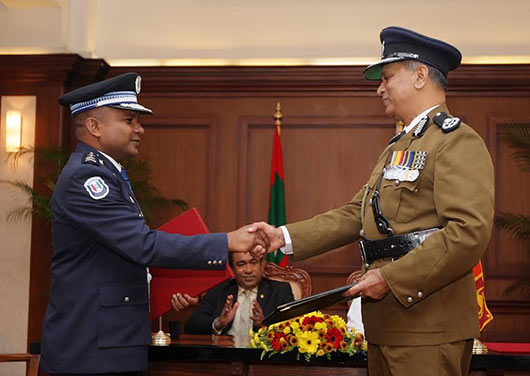 1 Response to Maldivian President Yameen to President Rajapaksa: “We Will Support You”

Home » Maldivian President Yameen to President Rajapaksa: “We Will Support You”