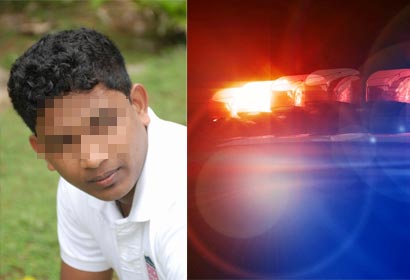 They said that the suspect was hiding in a house at the time of the arrest.

On January 9, the Colombo High Court issued an arrest warrant against Tangalle Pradeshiya Sabha Chairman Sampath Chandra Pushpa Vidanapathirana for not appearing in courts for the trial into the alleged murder of British tourist Khuram Shaikh and harassment of the victim’s Russian girl friend at a Tangalle holiday resort in December 2011.

When the matter was taken up for inquiry Counsel Shabdika Wellapuli informed court that those who stood surety for the Pradeshiya Sabha Chairman were present in court and they had informed that the accused  was admitted to a private  hospital in Galle on Wednesday evening after falling ill.

However Judge Kumudini Wickramasinghe issued a warrant for the arrest of the accused and ordered the sureties to produce the medical certificate in court on January 22.