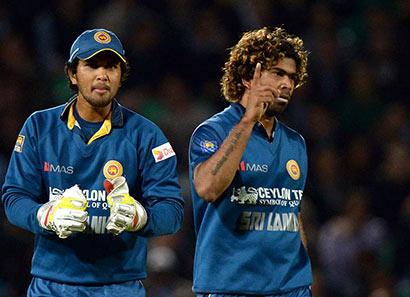 (Reuters) – World champions Sri Lanka held off an England fightback to win by nine runs in a Twenty20 international at the Oval on Tuesday helped by an explosive innings from Thisara Perera and superb bowling from Lasith Malinga.

Perera’s quick-fire 49 runs from 20 balls, having survived a dropped catch by Michael Carberry, enabled the tourists to post a total of 183-7 from their 20 overs while Malinga’s figures of 3-28 kept England at bay in response.

“The last couple of years I’ve been used to bowling in pressure situations, I’m used to it and I work hard in those situations,” Sri Lanka captain Malinga told Sky Sports.

“I really enjoy it, it doesn’t matter, I used to say to captains to give me the ball.”

Sri Lanka’s innings had been ticking along at a steady pace with Kithuruwan Vithanage’s 38 runs from 26 balls and Lahiru Thirimanne, who was eventually dismissed for 40, helping them to 122-5 when Perera came to the crease.

By the time he was run out on the final ball of the tourists’ innings he had added rocket fuel to an average total and propelled them to 183, with 22 runs coming from the penultimate over bowled by Chris Jordan.

England start poorly in reply with opening batsman Carberry, making his Twenty20 international debut, falling for seven runs in the second over and Ian Bell, playing his first T20 since January 2011, following soon after for 13.

England needed opener Alex Hales to repeat his batting heroics from the World Twenty20 in March when his scintillating 116 off 64 balls helped them beat Tuesday’s opponents and eventual winners.

But after moving to 66 from 40 balls, his off stump was sent tumbling by the brilliant Malinga.

With England edging towards their target, Malinga effectively snuffed out their hopes with a superb penultimate over in which he took Jordan’s wicket and conceded four runs.

“Lasith Malinga is world class, we have come up against him many times and he normally comes out on top,” England captain Eoin Morgan said.