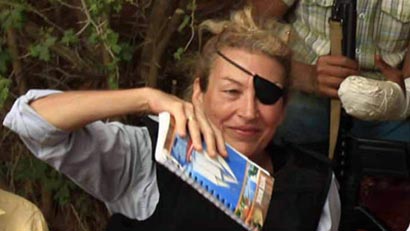 LONDON (AP) — Respected American war reporter Marie Colvin, who covered conflicts from Sri Lanka to Syria and stood up for the importance of independent journalism, died in a shelling attack in Syria on Wednesday. She was in her 50s.

Known for getting close to the story and for courage behind the front lines, Colvin had been holed up in the besieged city of Homs. She died alongside French photojournalist Remi Ochlik, the French government announced.

Colvin, from Oyster Bay, New York, had been a foreign correspondent for Britain’s Sunday Times for the past two decades, making a specialty of reporting from the world’s most dangerous places. She lost the sight in one eye during an ambush in Sri Lanka in 2001 — but promised not to “hang up my flak jacket,” and kept reporting on the world’s most troubled places.

“So, was I stupid? Stupid I would feel writing a column about the dinner party I went to last night,” she wrote in the Sunday Times after the attack. “Equally, I’d rather be in that middle ground between a desk job and getting shot, no offense to desk jobs.

“For my part, the next war I cover, I’ll be more awed than ever by the quiet bravery of civilians who endure far more than I ever will. They must stay where they are; I can come home to London.”

Easily recognizable for her black eye patch, Colvin was known for focusing on the plight of women and children in wartime. In an interview with the BBC on Tuesday, she vividly recounted the death of an infant in Syria.

“I watched a little baby die today,” she said. “Absolutely horrific, a 2-year old child had been hit. They stripped it and found the shrapnel had gone into the left chest and the doctor said ‘I can’t do anything.'”

Colvin worked in the Balkans, where she went on patrol with the Kosovo Liberation Army as it engaged Serb military forces. She worked in Chechnya, where she was repeatedly attacked by Russian jets while reporting on Chechen rebels. She also covered the conflict in East Timor after its people voted for independence.

She was outspoken in her defense of independent journalism, and a fervent advocate for the cause of war reporting. During a tribute service at Fleet Street’s St. Bride’s Church in November 2010, she offered a stirring appeal to media executives, pressing the case to continue investing in conflict zone reportage.

“Our mission is to speak the truth to power,” she said. “We send home that first rough draft of history. We can and do make a difference in exposing the horrors of war and especially the atrocities that befall civilians.”