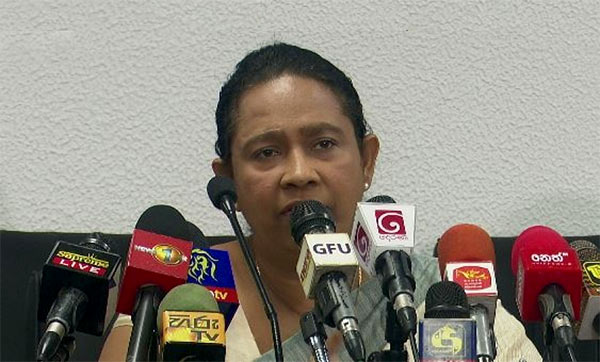 Health Minister Pavithra Wanniarachchi said that approval will not be given for mass gatherings and in the event of an urgent requirement it is mandatory to obtain police approval and a permit.

She said the best way to stay safe from the Coronavirus is to follow a method of self-quarantine and avoid crowded places.

Minister Wanniarachchi stated that this decision was taken as a precautionary measure since the number of confirmed cases of coronavirus (Covid-19) in Sri Lanka has now risen to a total of seven. The minister noted that there is a greater possibility for the virus to spread through mass gatherings highlighting the importance of preventing the virus from spreading any further.

She urged the people to minimize religious gatherings and private functions, adding that this decision had been taken by the Nation Committee for Corona Prevention and the government.

She said the ban on public gatherings would be imposed for a two week period, adding that as a government it was essential to making the right decisions at the right time. The Minister said that all foreigners arriving in the country would be sent for a two week quarantine period and those arriving from Italy and Iran would be on constant observation through medical health officers in their respective areas.

Minister Wanniarachchi urged all those arriving from these high-risk countries to act responsibly and thin of the rest of the population and self-quarantine themselves and avoid crowded places to minimize the spread of this virus.

Responding to a media query the minister said that there is no ban on election propaganda activities, but be it for election gathering or any other gathering, permission will definitely not be granted for any form of mass gathering.