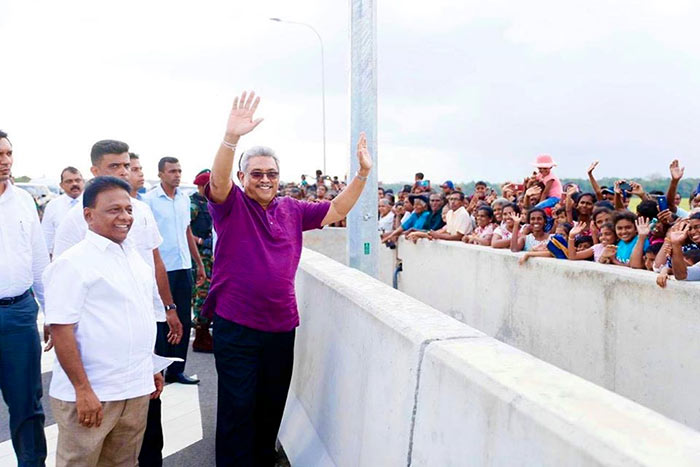 The Matara-Hambantota section of the Southern Expressway was vested with the public a short while ago.

The Southern Expressway links the Mattala Airport and Hambantota Harbour to the Commercial Capital, Colombo.

After opening the road near Godagama, Palatuwa interchange, the President and Prime Minister travelled on the Southern Expressway from Palatuwa to Barawakumbuka.

The President and the Prime Minister were warmly greeted by the general public as they passed interchanges.

The length of the extension commissioned today from Palatuwa to Barawakumbuka of the Southern Expressway is 58 km and it cost Rs. 169 billion.

The distance from Palatuwa to Hambantota is 96 km. The sections from Matara to Beliatta, Beliatta to Barawakumbuka, Barawakumbuka to Andarawewa and Andarawewa to Mattala were completed under 04 stages and the cost for these four stages was Rs. 225 billion.

Prime Minister Mahinda Rajapaksa addressing the public rally held near the Barawakumbuka interchange said that the government will start again the mega development projects abandoned by the previous government. He further said that the national security will be ensured in the country in a similar manner as the government constructs the expressways.

He also said that a Trade and Finance Centre will be built centering the Colombo Port and Katunayake International Airport. Steps have been taken to build an International Technical and Services Centre focusing the Hambantota Port and Mattala Airport, he added. Prime Minister Rajapaksa further said that the government will take actions to create nine economic corridors that will include the Port of Trincomalee and the port at Kankesanturai.

He further said that all these initiatives are mentioned in the ‘Rata Hadana Saubhagyaye Dekma’, the policy manifesto of the President Gotabaya Rajapaksa.

The President and the Prime Minister before attending the opening ceremony visited the Palatuwa Bhaudhyodaya Maha Viharaya and engaged in the religious observances.

The Maha Sangha including the Chief Incumbent of the Temple Ven. Gatamanne Gunananda Thera invoked the blessings on the President and the Prime Minister