Mendis shines as Sri Lanka prove too strong for Ireland 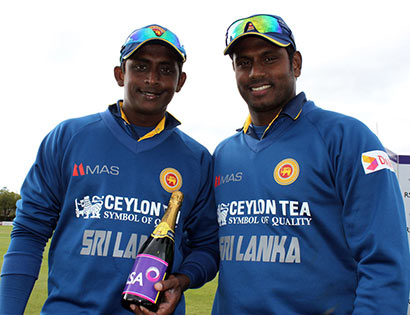 DUBLIN: Ajantha Mendis starred with both bat and ball as Sri Lanka enjoyed a comfortable start to their tour of the British Isles with a 79-run win over Ireland in the first one-day international in Dublin on Tuesday.

Mendis made a useful 18 not out in a total of 219 for eight, where No 8 Nuwan Kulasekara top-scored with an undefeated 42, and the unorthodox spinner then took three wickets for 27 runs.

Once Sri Lanka, who had been struggling at 95 for five, had set Ireland 220 to win on a slow Clontarf pitch, the game was always out of the reach of the leading Associate or non-Test nation.

Despite losing four for 11 runs in 29 balls either side of the 20th over, Ireland put up some late resistance before being bowled out for 140 with 10.1 overs remaining.

The difficulty of facing such a talented attack was highlighted by normally-free-scoring Ireland captain William Porterfield’s innings of 33, which used up 87 balls.

Indeed, only in-form Leicestershire batsman Niall O’Brien, with 33 from 39 balls including five fours, looked comfortable until Max Sorensen and George Dockrell’s lusty blows near the end.

Mendis was named man-of-the-match — two of his three wickets were the important ones of Porterfield, caught at deep mid-wicket, and Niall O’Brien, leg before.

However, he must have been run close by Kulasekara who, as well as making runs, removed the dangerous Paul Stirling with the last ball of his first over.

Ed Joyce, who has started the season superbly for Sussex, lasted only six balls before he was caught behind off Suranga Lakmal, a hammer blow to Ireland’s hopes of threatening a shock victory against the World Twenty20 champions.

But a third-wicket stand of 57 put Ireland back on course.

Then came the wickets which “killed us”, in the post-match words of Porterfield.

After Mendis had dismissed O’Brien, Gary Wilson and Porterfield were left stranded in mid-pitch with the former adjudged run out.

Kevin O’Brien then pulled his first ball straight to deep mid-wicket and when a bemused Stuart Thompson was Mendis’s third victim, Ireland were 74 for six.

Sri Lanka captain Angelo Mathews rang the changes to let his bowlers get adjusted to the pitch, which they were all seeing for the first time.

Ominously for Ireland with their eye now in, Sri Lanka will be confident of completing a series win in the second and final game on Thursday.

The Sri Lankans have arrived in Dublin without five of their star players — Kumar Sangakkara, for one, preparing for the upcoming Test series against England by playing in the County Championship for Durham, although he was out for a duck on Tuesday.

In the end they coped without them, although Sri Lanka needed a fine innings from Kulasekara.

His 42 not out came off 34 balls with three fours and two sixes and, crucially, he shared an unbroken ninth wicket stand of 43 in 22 balls with Mendis. It was a decisive turnaround and the bowlers, even without Lasith Malinga and Rangan Herath, did the rest. – AFP