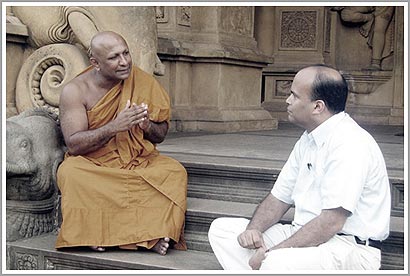 Women could play a vital role in bringing about a positive change in the political culture which prevails in Sri Lanka. However, unfortunately the number of women entering politics remains abysmally low. This was one of the views expressed by Leader of the Sri Lanka National Congress and UPFA candidate for Colombo Distract, Milinda Moragoda, at a neighborhood meeting with a group of residents from Kirulapona recently.

He emphasised that in order to get more women involved in the political process, special legislative measures should be put into place as has been done in many progressive countries. Paradoxically, Sri Lanka sadly lags behind in women representatives, in spite of the fact that women are at the forefront of many other fields and professions and are a major economic force.

He noted that women political leaders by providing an alternative outlook, might help to change the political agenda, and return the focus to policy and substance. As outlined in the SLNC Agenda, Milinda Moragoda stated that as a first step towards correcting this serious gender imbalance, he as Leader of the Sri Lankan National Congress will advocate to the government that it brings in the necessary legislative framework to allocate 25% of the seats at every level to women over a predetermined period of time.