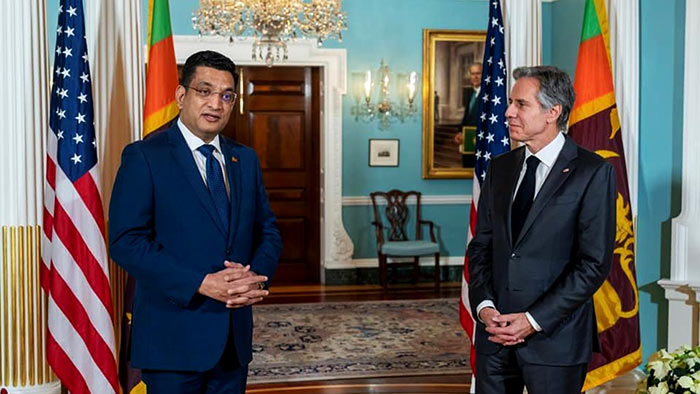 During the meeting, the two sides discussed the joint efforts of the two countries to combat local and global challenges.

As Sri Lanka and the U.S. are nearing 75 years of bilateral relations, Blinken, taking to his Twitter account, thanked Sri Lankans for their partnership and commitment to advancing shared democratic principles.

The Sri Lankan lawmaker and the U.S. state secretary have discussed a wide range of subjects of mutual interest including further elevation of the ties between the two countries in diverse spheres.

In addition to the meeting with State Secretary Blinken, the Embassy of Sri Lanka to the U.S. facilitated further interactions during the visit which included meetings with key U.S. interlocutors including political leaders from both the House of Representatives and the Senate representing both major parties and high officials of the State Department.

He had talks with members of Congress Rep. Bill Johnson (Republican – Ohio), Co-Chair of the Caucus on Ethnic and Religious Freedom in Sri Lanka and Rep. Raja Krishnamoorthi (Democrat – Illinois) who has shown an interest in Sri Lanka.

The Minister also had a meeting with Administrator, United States Agency for International Development (USAID) Samantha Power and expressed his appreciation of USAID for their generous support to Sri Lanka.

He met with Under Secretary of State for Civilian Security, Democracy and Human Rights Ambassador Uzra Zeya, who was accompanied by Deputy Assistant Secretary, Bureau of South and Central Asian Affairs of the Department of State Afreen Akhter.

Ambassador of Sri Lanka in United States Mahinda Samarasinghe along with diplomatic officers of the Embassy of Sri Lanka and officials of the Ministry of Foreign Affairs were also associated with the Foreign Minister at the meetings.